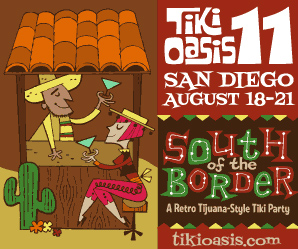 When I was a kid, one of the best things about having been born in August was that I never had to go to school on my birthday. These days, I have something else entirely that captures my attention at the tail end of the summer: Tiki Oasis.

Every August, as they have since 2006, tikiphiles gather in San Diego for a four-day extravaganza of Polynesian Pop madness. Rum, obviously, plays into the long weekend, but I will say this about a tiki crowd: no other group of drinkers is as open, friendly, and welcoming.

According to the official history,


Originally conceived as a fundraiser to support the rehabilitation of the Palm Springs Caliente tropics Motel, Tiki Oasis outgrew its original 88 room location and Southern California-centric following and in 2006 moved to its current location in San Diego where the event sells out a 400 room hotel and draws over 2500 attendees from all over the world.

The theme this year is South of the Border. From 18-21 August, revelers will lounge around the pool, attend educational sessions, buy and sell tropical-themed merchandise, and enjoy a musical lineup that explores the Latin roots of exotica music, a cornerstone of tiki culture. I'll be busy with birthday shenanigans during Tiki Oasis, but some of them may just have to shift over to the hotel. After all, it's about three miles from my house — how could I pass up the chance to spend time with such a fun crowd?

Posted by Matthew Rowley at 4:50 PM

Hope to bump into you there!