I met John Besh in Oxford, Mississippi about two months after Hurricane Katrina. Although he is known as a New Orleans chef, Besh hails from Slidell, Louisiana where I had family before the storms.

Before floodwaters had even begun to subside, I had spoken to all my friends and relatives in and around New Orleans, making sure everyone was okay. It wasn’t until I saw so many in one place a few months later — the Southern Foodways Alliance’s annual meeting — that I realized everyone was not okay. Good friends had put on weight. Others had shed pounds they didn’t have to lose in the first place. All were in various degrees of shock and many were self-medicating with too much liquor. 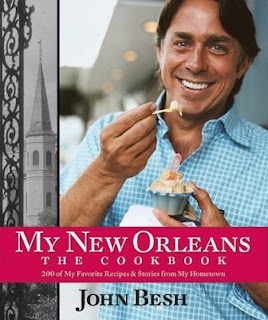 Besh was there with a burning ferocity. He told stories not just about of people surviving, but of people determined to rebuild their homes and their city. During the time when many Americans — even, I'm saddened to say, friends — argued against ever repopulating New Orleans, he was practically galvanized by the challenges ahead. While so many of my New Orleans friends seemed almost overwhelmed by the devastation, the former Marine set to work. He famously navigated streets of the flooded city in a boat, bringing red beans and rice to those who needed it. I don’t go much for heroes or role models, but John Besh might be a bit of both. I'm not interested in his stints on Iron Chef, his appearances on Bravo, or the other aspects of his celebrity. When it mattered, when the world seemed like it might have ended, he rolled up his sleeves and he fed people.

And he’s been doing it ever since. Of course, he was a chef before Katrina, but since then, he has become arguably New Orleans’ most well known outside the city. I’ve eaten uncounted times at his restaurants and will undoubtedly end up in one before Tales of the Cocktail is over this month. As often as I visit, I don’t, at the end of the day, live in New Orleans. That may change one day. But until then, one of the touchstones of the city’s cookery is Besh’s massive cookbook, My New Orleans.

In it, Besh writes about the aftermath of the storms:


The story of our city is greater than those storms. We have been here for over 300 years, and we'll be here for another 300. Maybe it's about my children's generation, and their children's. Will they still eat red beans on Mondays? Make St. Joseph's Day altars? Will they still love the Saints? Will we ever win a Super Bowl? All I know is that I cook New Orleans food my way, revering each ingredient as it reaches the season of its ripeness. No other place on earth is like New Orleans. Welcome to the flavors of my home. Welcome to My New Orleans.

In short order, I will share with you one of my favorite recipes from Besh’s book. But in the meanwhile, I’ll leave you with this: The Saints did win the Super Bowl. Red beans still get made every Monday. And, by god, New Orleans will most assuredly be with us for another 300 years.

Have no idea why i haven`t bought this book yet but i sure will do:-)

As for what he did and still do for the people and the city he´s nothing but a true hero!

A warning, Tiare ~ the book is huge, and oversized format that may make shipping to Sweden expensive. But I think it is probably worth every penny. Besh Has a new book out now about family cooking. I don't have a copy, so I can't say for certain whether it's good or bad, but it's hard to imagine this guy publishing a bad book.