This August, I am headed to Colorado to participate in lecture series hosted by The Museum of Contemporary Art Denver. MCA Denver's weekly series Mixed Taste throws together two speakers most Thursday evenings over in the Summer. The catch is that the talks — at least at a glance — have little to do with another. 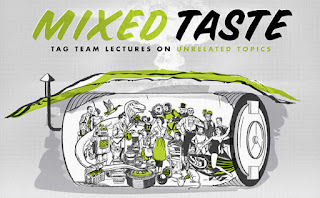 This Summer's lineup covers zombies, the Austrian avante garde, cliff diving, performance enhancing drugs, and more. I'll be talking August 22nd about moonshine: what it is, what it's not, and why something predicted to die out forty years ago is still making headlines. Joining me is Jason Marden from the University of Colorado to talk about game theory.

One of us talks for twenty minutes, then the other one does the same, and then...then, I think we mud wrestle. Or maybe open up the mic to the audience to take questions.

The lineup makes me wish I were around Denver more often:

Posted by Matthew Rowley at 2:40 PM No comments: 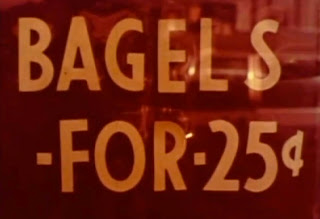 We enjoy a many excellent things here in Southern California. Our bagels, regrettably, are too soft, too airy, too...bland. They should be chewy, savory, just a little tacky to the tooth. When I stumbled across a digitized version of Hot Bagels this morning, I was reminded of everything I miss about well-made bagels from back East; making by hand, simmering in scalding water, and tearing into a hot, fresh one with my teeth. Really. You doesn't just daintily nip off the part you want; that part needs to be pulled apart with a strong bite and a firm grip.

The bulk of the old 16mm film  from the Brooklyn Public Library shows bagels being made in Brooklyn.  In it, bagel — enthusiast is too tame a word. Obsessive? Yes, bagel obsessive Marty Rosenblatt can hardly contain his excitement to order a dozen. Ham isn't often found in bagel shops, but here Rosenblatt lays it on thick:

Hiya, Freddie baby, give me a dozen...my life's blood! Without bagels, what is a day? Yeah, make it a dozen assorted. Dat's it, give me the garlic, the sesame, the onion; give me them all baby, that's it! They're still handmade eh? Hot bagels! Wait a second, let me PAY yah! Here you are, kid.

Posted by Matthew Rowley at 9:00 AM No comments:

Hans Fischerkoesen's animated advertisement for Underberg bitters is a nightmarish glimpse at one woman's troubled mind. The 1955 ad, Durch Nacht zum Licht (Through Night to Light), shows an unnamed woman sweating and tossing in troubled sleep. She is threatened by skeletons, rats, demonic red hands, explosions, ghosts, and a floating gun. At one point, she tumbles in free fall past tall buildings, part precursor to Mad Men's opening montage, part Camille Saint-Saëns' Danse Macabre. The sleep of mid-century German women seems a dark place indeed. In the end, her night terrors are banished by a small bottle of Underberg bitters, famous even today as a stomachic for soothing heartburn or simple overeating.

After seeing such a disturbing vision of sleep, I need a shot of Underberg as well. Well done, Herr Fischerkoesen.

Sometimes known as Germany's answer to Walt Disney, Fischerkoesen (1896-1973) had been a sickly child and, with his sister Leni, put on puppet shows and other entertainments for their family in Bad Koesen. During World War I, he worked in army hospitals near the front and, during slack stretches, he drew. When the war was over, he cobbled together money to make an animated film, Das Loch im Westen (The Hole in the West). No copies seem to survive, but William Moritz writes in The Case of Hans Fischerkoesen that the animated film was an indictment against war profiteers as the true cause of war.

By the Second World War, he had become a well-known animator. Though he was no Nazi, he was forced to comply with edicts from Reich Minister of Propaganda, Joseph Goebbels, to compete against American animation technology. Moritz makes the case that, while rising to Goebbel's challenge, three of Fischerkoesen's animated wartime shorts were, in fact, subversive and slyly repudiated Nazi rule. After the war, he returned to a successful animation career, turning out many advertising shorts that won awards in Rome, Cannes, Milan, Monte Carlo, and Venice.


Posted by Matthew Rowley at 9:04 AM No comments:

Getting a strong drink in San Diego has always been as straightforward as walking into the nearest bar. In a town where many equate strong with good, however, finding well-balanced cocktails still takes some footwork. Fortunately, the odds of tracking down a good mixed drink has shifted in the last eight years since bars such as Lion's Share, El Dorado, Craft & Commerce, Prohibition, and the Grant Grill at the US Grant Hotel have stepped up the game. What we don't do particularly well (except for individual bartenders at certain bars on particular nights) are tiki drinks.

Erick Castro hopes to raise our town's tiki profile a bit with a new tiki series at Polite Provisions, the Normal Heights bar he opened this year with the partners of Consortium Holdings. The second Tuesday of every month, Castro plans to host a Tiki Takedown. Or maybe it's a Tiki Tuesday. He seemed flexible on the name when I dropped by last week. The concept, though, is solid: on that second Tuesday, regular and guest bartenders will riff on classic polynesian-pop cocktails and serve contemporary drinks in the tropical style.

Helping to launch the series, Marcovaldo Dionysos is coming from San Francisco bar Smuggler's Cove next Tuesday, May 14th. Does that name ring a bell? I once asked Marco — to my mortification — for a Guatemalan Handshake. He was kind enough to give me what I wanted rather than what I requested.

Expect plenty of rums, fresh citrus, and lashings of spice. Named after a boat in George R. R. Martin's Games of Thrones series, Castro's Cinnamon Wind uses Jamaican rum and spike of Becherovka, a bitter Czech herbal liqueur with a cinnamon backbone that doesn't get the play it deserves.

Shake with ice ice cubes and pour — ice and all — into tiki mug. Garnish with freshly spanked mint (don't just fluff it; spank it!), then grate a cinnamon stick with a microplane over the whole thing.

Tiki nights at Polite Provisions (4696 30th Avenue, San Diego, CA 92116) run from 7pm-2am on the second Tuesday of every month. The kickoff is next Tuesday, May 14th. If I get out from under a cascade of deadlines, you may see me there. If not, raise one for me. Either way, break out your finest Hawaiian shirts and dresses.

Posted by Matthew Rowley at 3:49 PM No comments:

As a teenager, I ate the wrong thing at a black-tie dinner, went into anaphylactic shock, and nearly died. Probably would have, too, if it weren’t for a medical technician at a nearby table who leapt to action. Fortunate, too, was the setting — Kansas City’s River Club, a swank private club perched on bluffs overlooking the churning Missouri River. Over the years, this or that member has required an emergency dose of oxygen; tanks of the stuff were squirreled away behind the bar for just such times. Thank god for old men in failing health. That night, one of those canisters helped save my life. Although it’s no longer an event that springs to mind often, I’ve kept a relaxed view of my own mortality ever since.

But now and again, memories of that brush with death gurgle to the surface, especially when I pass The Alibi, a San Diego bar known for its cheap drinks and low-key clientele. The Alibi, in other words, is a dive. Along its western side, a long stretch of wall is painted like a chalkboard. Stenciled, column after column, is the phrase “Before I die, I want to ____________.” Chalk is there for anyone who wants to express their hopes, dreams, jokes, and rude comments about mothers. Passersby have noted that they want to learn to surf, own a monkey, move to France, travel to all seven continents, and vote for a candidate they can believe in. It's a reminder that we, too, need to take steps to make us happy. Especially that monkey thing.

The Before I Die project is not indigenous to San Diego. Rather, it is the creation of New Orleans artist Candy Chang who painted a chalkboard wall on an abandoned house in her neighborhood in early 2011. The wall struck a nerve. Similar walls have sprung up around the world — Denmark, Germany, the Philippines, South Africa, Korea, China, Ireland, and across the USA.

As I walked by The Alibi yesterday, an employee washed off the night’s comments. “Every day I wash off the old and make room for the new,” he told me. “On the weekends, sometimes twice a day.” Dougie was dressed as a garden gnome for the job, but his tone was respectful, even reverent. “People write funny stuff, or hopeful, or whatever. Sometimes, it’s heartbreaking. One time, this lady wrote 'Before I die, I want to see my daughter survive cancer.' She told me ‘I know she’s not going to make it, but it makes me feel better to write that.’ I nearly cried.”

He nodded to the first column, now blank from his scrubbing. “Go on. You can be the first.” I declined.

That night in Kansas City when I was certain I was dying gave me clarity I’ve never relinquished. As consciousness faded, I regretted committing various stupid and cruel acts — and not pursuing things I wanted. After reviving, I made amends for my cruelty and started ticking off those missed opportunities. I learned not just how to drink whiskey, but how to make it; learned to shoot guns; published one good book and contributed to a bunch of others; got a fist full of degrees; traveled a lot more; backpacked through Europe (and still return as often as I can); taught myself several languages and software programs (none fluently, but each enough to do what I need); learned how to cure bacon and make sausages; and finally figured out how to fold a contour sheet.

I've achieved other goals both momentous and mundane and will knock out more before I'm gone, but even if I drop dead of a massive heart attack this afternoon, I will die knowing that my friends are genuinely good people, that my finances are in order, and that my family loves me. Everything else is gravy.