A popular belief is that dogmeat, cat meat, and rat meat
have been eaten in Europe as an extreme measure
only during periods of war-induced famine.
I hate to put an end to that fantasy.
Calvin Schwabe
M.S.D.V.M., M.P.H., Sc.D.
The Atlantic today has a piece from San Diego area philosophy instructor Adam Phillips in which he argues that eating pig is a moral equivalent of eating dog. His article is a response to Nicolette Hahn Niman’s argument that eating pig and eating dog are not the same thing at all.

I’ve eaten snails, scale insects, cow, mutton, squab, elk, deer, reindeer, raw oysters, squirrel, snakes, goat, suckling pig, frogs, jellyfish, eels, ass (oh, ok, donkey), horse, goose, chicken eggs, catfish, yogurt, cheeses, shellfish, and any number of animals and bugs that would appall one or more people around the world. Don’t even get me started on all the fermented, pickled, and brined fruits and vegetables I’ve got in the house even now. Olive, anyone? Maybe some boozy cherries? 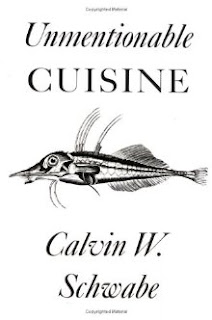 The only reason I haven’t eaten dog is that I’ve never been in a place where it was either offered or, I felt, prepared by someone who knew how to do it properly. Seriously, if I’m going to eat dog, I want it to be very good dog indeed, and not just the kitchen experiment of some cruel bastard throwing Lulu or Old Yeller on the grill.

You may have heard that westerners simply don’t eat dog. In fact, Ms. Niman makes the point that doing so would be akin to eating a family member. We’ll set aside the anthropological concept of endocannibalism — eating one’s own people — and the Fore tribe’s well-known endemic brain disease contracted from eating the infected denkorgans of deceased family members. Family member or not, westerners have long eaten dog. Professor of Veterinary Epidemiology Calvin Schwabe even provides a recipe for pressed dog from those most proper of Europeans, the Swiss.

In Unmentionable Cuisine, Dr. Schwabe presents a number of European preparations for dog and points out that numerous European countries have had laws — and special shops — for preparing such delicacies. Lest you think he's merely a quack, his book has been praised by Craig Caliborne, James Beard, and MFK Fisher. Here is his Swiss recipe for dried dog meat.

Hang a dressed dog carcass for 8 to 10 days at about 36°F and then debone it, retaining as large pieces as possible. Pack these in oak barrels in the following salt mixture for 7 days at 45° to 50F: for each 20 lbs. of meat, use 7 oz. salt, 1/6 oz. saltpeter, 1/3 oz. sugar, 1/3 oz. cracked black peppercorns, and ½ bay leaf. Repack the pieces after two days, putting those pieces which were on the bottom on the top. Liquid will be drawn from the meat. After 7 days, add some red wine containing crushed garlic to the brine that has been formed and leave for several more days. After this curing, wash the meat in warmish water, but don’t soak it. Run a piece of binging cord through the end of each piece of meat and press it between two boards in an open press (that is, with free air circulation between the pieces) in a drying room at a room temperature of 50°-55°F and 72 to 75 percent humidity for 5 to 6 weeks. After this pressing process, hang the pieces of meat freely in the same drying room for another 1 ½ to 4 ½ months (depending on their size).

On a side note, I am pleased to have known Dr. Schwabe whom I found soft-spoken, charming, gentle, and erudite. He kindly agreed to speak on food prejudices for a speakers’ series I arranged at the University of Pennsylvania in 2002 where he held the audience in the very palm of his hand. He died in 2006 and is missed.

I've had the opportunity to eat gazelle, wildebeest, and zebra - tasty.

You're three up on me. Donkey wasn't bad, but horse was vile. Up in the Belgian hinterlands one Autumn, I ordered a horse steak while out with a friend. I knew it was horse. I knew it was a steak. I was not, however, prepared for the sheer size of it. At least a kilo, it was also almost three fingers thick. I ate what I could (I was hungry after all) but memories of the horrible sweetness of the meat makes me recoil even to this day. On the other hand, if someone said "Man, that's not how you prepare horse, THIS is how," I'd at least listen and probably go for round two.

And yet, I wasn't comfortable upon discovering I'd consumed horse.

I happen to know that in Vietnam, there are restaurants visited by a small but loyal (mostly male) segment of the population that specialize in dog, considered an expensive delicacy. The dogs are raised to be eaten, rather than one day Fluffy, next day on your plate. Regardless, it's another instance where I just don't think I'll be hungry enough to want that kind of flesh anytime soon. But then, I'm also a dog owner...

I'm not a dog owner these days, Tammy, though I had one as a kid and am considering another one. Not, of course, to eat, but as a proper animal companion. Had my eyes on French bulldogs ever since I saw one in Baltimore and thought it was the most adorable little monstronsity I'd ever laid my eyes on. That it turned out to be really sweet cinched it. I'll get one...one of these days.

Interesting addendum to the topic at hand:
http://www.cookingissues.com/2010/08/13/new-zoo-review-cooking-odd-meats/

It's actually really good, too.

I tend to agree that it's on par with eating a pig.