I've lost my goddamned mind:
just conducted an interview
of the chicken wings I'm frying at home.
Surprisingly, they have a voice a lot like mine,
only higher.
~ Facebook post from me last night,
an increasingly rare occurrence
Last month, I spent the better part of a week in Portland, Oregon. Like so many before me, I was smitten. Can you blame me? I’m from San Diego, a desert town on the coast. It’s hard not to be taken with Portland’s lush greenery and air so moist you can feel it even on a sunny day (or, rather, during sunny parts of most days). Add to that the breweries, the distilleries, the Bookstore, hiking out in the gorge, the cocktails, and the food…oh, sweet Jesus, the food. 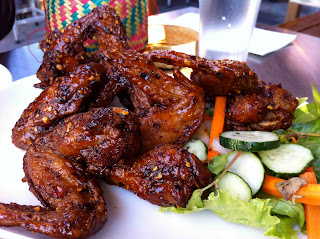 A plate of spicy chicken wings at Andy Ricker’s restaurant Pok Pok, though, was so good that we ordered another round even though there wasn’t one single hungry person at the table. I’m not the first to write about the wings. I won’t be the last. The have a fame of their own. When my friend Barry sent directions for making them from a 2008 Food & Wine recipe, I bought three kilos of flappers and broke out the fryer.

It was too much. None was left.

The menu calls them Ike’s Vietnamese Fish Sauce Wings. No disrespect to Ike, but most everyone I spoke to in Portland called these crispy glazed chicken wings Pok Pok wings. In brackets are my adjustments and notes. You’ll notice that I like garlic and heat. To add some spice to the glaze, I added a healthy dollop of sambal oelek, an Indonesian crushed chile paste that’s widely available even in whitebread grocery stores.

In a bowl, whisk the fish sauce, sugar, [sambal oelek, if using], and crushed garlic. Add the wings and toss to coat. Refrigerate for 3 hours [more than that and they become oversalted from the fish sauce], tossing the wings occasionally.

Heat the 2 tablespoons of oil in a small skillet. Add the minced garlic; cook over moderate heat until golden, 3 minutes. Drain on paper towels.

In a large pot, heat 2 inches of oil to 350°F. Pat the wings dry on paper towels; reserve the marinade. Put the cornstarch in a shallow bowl, add the wings and turn to coat. Fry the wings in batches until golden and cooked through, about 10 minutes. Drain on paper towels and transfer to a bowl.

In a small saucepan, simmer the marinade over moderately high heat until syrupy, 5 minutes. Strain over the wings and toss. Top with the cilantro, mint and fried garlic and serve.

Salty? Yes. But not too much so as long as you don’t overdo the marinating time. Cook a pot of plain white rice, crack open a beer, and make sure you've got plenty of napkins.

Posted by Matthew Rowley at 9:41 AM

Pok Pok is a Portland gem; always packed no matter when you go. Glad you enjoyed it, and our fair city!

Enjoyed it? Hell, I was looking at real estate by the end of my first day. Oh, yes, I'll be back.

I'm obsessed with these wings. Your recipe looks like it was taken verbatim from the Marin Homestead blog. I know because I've used the same recipe...

Hey Adriana ~ The wings are well worth the obsession. Never heard of the Marin Homestead blog, though. I'll take your word that this recipe is published there, too; as I said, it's from a 2008 issue of Food & Wine. Sounds like we got the recipe from the same source. Identical to Pol Pok's? No. Delicious? You bet.

Bless you, sir. I'm so happy I can come even close to repeating this experience.

Hey Anonymous ~ Make them at once. And again. Then, about a week later, succumb to the twitching desire for one more batch. Maybe just a small one. Maybe not...

I adored chicken wings, I can imagine the taste of this yummy caramelized bits already on yours... drool...
Delicious! I still have chicken wings in my freezer,will give it a try.Thanks for sharing.