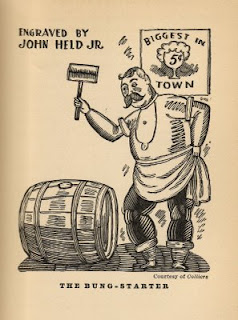 Incidentally, in my youth the bung starter was the barkeeper’s favorite weapon. Most whiskey was sold from barrels, so at least one was to be found behind every bar. Time after time, when the unmistakable sounds of riot came from the saloon next door, I have looked on the scene from the safety of the rear entrance—our store and the saloon shared a back porch—and watched one of the Wolf brothers in magnificent action, conquering the field with a bung starter. By the time the police arrived, only an ambulance was needed.
~ Paul M. Angle
"My Father’s Grocery Store "
By and large, I’m content with my bar gear—copper pans, strainers, funnels, a fancy-ass mandolin, zesters, shakers, two-liter jars for infusions, and an array German, French, and American knives deck the kitchen walls and cabinets. As the collection metastasizes into the living room, there are julep cups, brandy snifters, bottles for homemade bitters, cordials, and ratafias, and several shelves of cocktail books. Honestly, it’s more than anyone truly needs at home.

But I’m missing one tool: a bung starter.

You heard me: a bung starter. Before aluminum beer kegs, barkeeps kept an oversized wooden hammer for removing the wooden bung that plugged the, um, bunghole. Quit your sniggering. With a barrel on its side and facing up, this little maul would be tapped on the outside around the bung to drive it, bit by bit, up out of the round hole so a spigot could be inserted to dispense the precious liquids within. Sometimes bungs eased out peaceably. Other times, they blew off explosively with a spray of beer. Eyes were probably lost, maybe even widows created. Whiskey and vinegar barrels got the same treatment.

It’s not that I have any wooden barrels around the place needing their bungs popped. Nah, it’s more mundane than that. Because mint juleps are nearly our house drink, we go through a fair amount of crushed ice. And if it’s not for a julep, crushed ice comes in handy for a variety of other drinks, not least of which is the Painkiller, a rum and fruit juice concoction that likely has caused as much pain as it supposedly relieved.

As it stands, I’ll put whole ice cubes in a canvas bag not unlike a small pillowcase. Fold over the top. Wail on it with a rolling pin. Some folks use the gripping end of a big muddler (I’m looking at you, Thomas Waugh). Others use a household hammer, though I find too much risk of its edges ripping the bag. A rolling pin is—meh—an ok workaround. A fleischklobber for flattening meats could work, but I'm trying to avoid meat/cocktail cross-contamination these days.

Both David Wondrich and New Orleanian Chris McMillian have ice mauls that would make Thor flush with envy. While McMillian may wax lyrical over a mint julep as he reduces his ice to submissive little shards (see below), I’ve seen Wondrich thunderously hammer away, shattering ice into into submission as he worked into a maniacal sweat to keep up with demands of thirsty revelers.

That’s what I need: a broad surface to avoid inadvertently ripping the bag, wood with a touch of malleability to it, and enough weight that the whole thing swings like a dream.

Chris tells me that his source has dried up. Any woodworkers out there up for the task of a custom order?

I've learned two things from this post. (1) I need Thor's Hammer. (2) I need to hire a poet for when I'm mixing drinks.

Herr Penguin: (1) we all do, baby. (2) I would be happy to recite poetry while you mix drinks, as long as you don't mind off-the-cuff and somewhat meandering doggerel about bartenders from Nantucket.

Thanks Rowley...now I have to add "big ass ice crushing mallet" to my Xmas list...

I say we source a skilled woodworker who could make 'em and put in a bulk order. Well..."Bulk" handwork: you know, maybe ten.

Speaking of bungs, I need t.v. for my bungholio.

I think if you find a tool traditionally known as a carpenter's mallet you might find it will serve your purpose. Here's an example:

YellowZep ~ Now THAT hits the nail on the head. Or, rather, the bag of ice. Thank you for tracking down that link. I've heard that a maul has been made for me in Kansas City but I haven't been that way in a few weeks. Here's hoping the new year has plenty more crushed ice.

eBay has a lot of historical ones (mainly old wood working mallets) as well as modern ones.

I got tired of being outbid on the historical ones so I got factory seconds of a nice pair of mallets for short change. Now we have his&hers ice crushing tools (hers has burlesque stickers on it).

And after having to crush ice with the bottom of a Midnight Moon bottle at the Mixo House for the Trader Tiki night, having a good ice crushing tool makes things so much the better.

Burlesque stickers ~ so much better than burned-in brands declaring "his" and "hers."

My dad fashioned a huge one for me and mailed it last year. It pretty much rocks. Except, of course, when I blew out the seams on my old Lewis bag.

And here's bit about that maul my dad made, including a photo: http://matthew-rowley.blogspot.com/2011/02/thats-my-hammer.html