In 1723, Jacques Savary des Bruslons informed readers of his Dictionnaire universel du commerce that native Brazilians — before Europeans came on the scene — were the most robust of all men, seven feet tall, and at the age of 100, they were no more decrepit than Europeans aged merely 60 years. However, he noted, ils ne vivaient que de maïs, d’oranges et de sucre — they lived on maize, oranges, and sugar. French merchants made fortunes on that Brazilian sugar and, in the process, some developed a taste for a Brazilian cane spirit called paraty (par-a-CHEE). 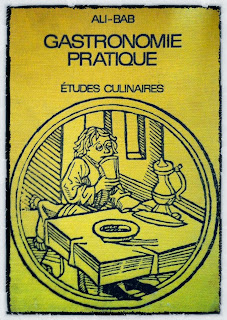 Over 225 years later, the 9th edition of Henri Babinski Gastronomie Pratique (1950), gives a recipe for a paraty cocktail "particularly appreciated in Brazil," but which is too strong, presumably, for more refined French palates. Paraty we would recognize today as cachaça and the technique he recommended for taming it as a variation on the dry shake so popular in recent years.

The dry shake, as practiced today, is a straightforward technique used to emulsify egg whites in drinks. Some think it’s new; it’s not. First, some portion (and sometimes all) of the cocktail’s ingredients is put in a shaker with the egg white. Then the bartender seals the shaker, shakes hard to emulsify, then re-shakes with ice, and pours the drink in a glass. It may or may not be strained into the glass, depending on the drink — and the bartender. The result is a velvet-textured drink with a foamy head made of very fine bubbles.

The technique Babinski (or Ali Bab, as he was known) recommends is different. Paraty — named for a colonial-era town of the same name in the state of Rio de Janeiro — was rough stuff for drinkers used to fine French brandies (though God knows some calvados could strip the paint off a barn door). It had what Ali Bab referred to as l’odeur empyreumatique, a “burned” smell, possibly from using direct-fire stills.

As anyone who has ever truffled eggs in the shell, refined homemade wines, or cleared soup stock or boiled coffee knows, egg whites can be used to absorb odor and trap particulates in liquids for easy removal. This is the same idea. Mixing egg white with the “burned” spirit, then straining the mix before using it in a cocktail, helped to remove some of the objectionable odor — which, seemingly, native Brazilians did not mind, even those who lived to a hundred years and stood seven feet tall.

Once softened and strained, the spirit was approachable for goût francais and could be blended with lemon juice, pineapple syrup, and bitters.

Cachaça imported today in the United States and western Europe generally does not need such taming. Leblon, for instance, works just fine without the strained egg white treatment. Some of today’s moonshine, though, could benefit from a bit of last-minute polishing…

Mix the paraty and egg white in a glass, which has the effect of mitigating some of the paraty’s burned aroma: shake it all for a few minutes, then strain.

Put the strained paraty in a shaker with lemon juice, pineapple syrup, angostura bitters, crushed ice, shake to chill; pour into a cocktail glass, squeeze the lemon zest over the drink and serve with small straws.

And the original for those whose French is better than mine:

When the sun bears down on Southern California, hot buttered drinks are alien, repulsive things. San Diegans in particular subsist on the simple pleasures of good beer and strong margaritas. Let the fog roll in or a chill come on, though, and our booze equilibrium shifts. We may not get snowdrifts or nor’easters here, but on windswept nights when fat drops of rain spank the windows and tree tips slap wetly against the house, hot rum is a certain prophylactic against the cold.

Some folks make a simple, almost Puritanical, hot buttered rum: a tot of rum, topped with hot water, and garnished with a little pat of butter. I suppose that does keep the cold at bay, but its comfort is brutal and perfunctory. I like something more luxe, something actually pleasant to drink, something that makes me look at the bottom of an emptied mug and think 'Maybe one more...' Adding a stick of cinnamon helps, but it still wants a bit more character. Nothing fancy, just…a bit more. For that something extra, I swap out water with spiced cider and flavor the butter with that old British baking standby, mixed spice.

Mixed spice is similar to American pumpkin pie spice, but with coriander, mace, and cloves. We know all these notes; they're just arranged here differently. Mash a bit of it into unsalted butter with brown sugar and there's a spiced butter that is a nice touch on pancakes, waffles, English muffins — even bread and butter pudding. But let's not forget why we're here. We're doctoring rum with it. So let's get on with it.

Blend together and store in an airtight container.

This will make more than you need for the butter. Tuck it into the cabinet and break it out for apple pies, puddings, gingerbread, braised pork, pumpkin stews, etc.

For the spiced butter, it's almost ridiculous to think of what I do as a recipe. It's more of a guideline; weigh some quantity of butter, add half as much brown sugar, and mash in enough mixed spice with a fork or the back of a spoon to give it the intensity of flavor I like. For those who insist on proportions, try this:

Mash into a paste either by hand or in a mixer. Roll into a 5" log on parchment paper. Twist the ends in opposite directions, and store in the refrigerator.

Heat the apple cider, spices, and orange peel in a 2-quart pan and simmer gently15 minutes or so. Meanwhile, pour the rum into heat-proof glasses or ceramic mugs. Top off with hot spiced cider and slip a disc of mixed spice butter into each mug.

Repeat until the cider is gone. Then go get more cider.


Posted by Matthew Rowley at 10:40 AM No comments:

Whether you agree with the estimate of over 600 new distilleries either up and running or in the works from the American Distilling Institute or take the more conservative view from the Distilled Spirits Council of the United States (which puts the number a lot lower), there's no denying that the pace of American distilleries' growth is picking up. More are on the way and more state and local governments are cottoning to the notion that distilleries can be good for local economies.

Nevada is one of those places about to have a new distillery. Word has come that the San Francisco-based Bently Holdings will be converting an old mill — the Minden Flour Milling Company — into a new distillery called Nevada Heritage near Lake Tahoe. They'll need an experienced distiller.

Details to follow, but first a reminder: I have no connection to the distillery, Bently Holdings, or the Bently family. I am merely passing on the info, so please don't send me a resume or ask details about the job; I won't be able to help. Use the contact details in the link below; they're the ones to ping with questions about this job.

Now, then. Here's what the job announcement lays out. They're looking for someone with 5-10 years distilling or blending experience who holds a brewing and distilling MSc. certificate. Seems they'll want to make single malt whiskey, bourbon, absinthe, and gin. Furthermore,


The Master Distiller will be responsible for developing the Nevada Heritage collection, planning and executing distillation operations, overseeing production, and managing inventory. With support from Marketing and Sales teams, the Master Distiller will also showcase and advertise our spirits to raise brand awareness and build relationships with local and national media sources, all while complying with relevant federal, state and local regulations.

A more complete description of the post is here with directions for submitting an application.
Posted by Matthew Rowley at 2:13 PM No comments:

Dropped off the radar for a bit. My apologies. I haven't been sick or injured or thrown in the towel on writing here; there's a more mundane explanation. For months, I've been meeting a series of deadlines that left little time for seeing friends or, frankly, writing for fun — which the Whiskey Forge definitely is. There've been talks, domestic and international travel, articles, book chapters, editing, press, and a new book in the works (yeah, it's about booze; no, I'm not quite ready to talk about it).

Monday night I returned from two weeks traveling to the UK and Germany. London is fantastic and Berlin incomparable — I visit both as often as feasible — but San Diego is glorious. My first morning here, I walked outside, turned my face to the sun, closed my eyes, and just luxuriated in the warmth and the sound of palm trees swaying in those gentle California breezes. In my first day back, I soaked up more sun than during a fortnight abroad. Miss the seasons? Eh. I do like Autumn, primarily for the chance to prepare cold-weather food and drink, and the near-eternal Spring of San Diego, but you can keep Summer and Winter. I'm hunkering down here for the next few months until this whole rain/ice/snow thing blows over.

Well, except I'll be in Jalisco next month. I've heard there's a distillery or two there. Something about tequila...

Posted by Matthew Rowley at 6:47 AM No comments: