Whether the house specials are tropical drinks or tacos, it seems as if Tiki Tuesdays are cropping up in bars all over these days. Some tikiphiles don't even bother with bars and simply make delicious rum concoctions at home before the work week is even half over. Me? I don't know why we have to make it Tuesday. Seems Tiki Wednesday and Sunday are perfectly fine days to mark the passing of the week. That's not to say I would turn around and leave if I should stumble across a full-blown Tiki Tuesday in progress...and that's exactly what I found at Rogue Ales public house in Portland last month. 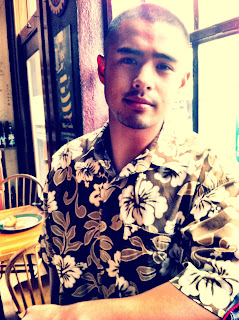 Because I intended to catch up with Blair Reynolds of tiki syrup fame, Craig Hermann (aka Colonel Tiki), and their families while there, I packed along a Hawaiian shirt. For this, I was roundly mocked at home. This was, of course, not the first time that has happened. Whenever I don one of those floral shirts, my sidekick Dr Morpheus asks "Is that what you're going to wear?" Sometimes, admittedly, I put one on just to elicit this response. I never said I was not mischievous. Photographer Douglas Dalay will more blatantly lean in closer to me, cup one hand to his ear, and make the most pained expressions when he sees me wearing such a shirt. "What?" he'll mock-shout. "What?! I can't hear you over that loud shirt." 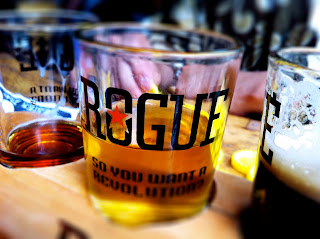 So with those two in tow, I dropped by Rogue Ales to take a load off and try to catch up with distiller John Couchot. John was offsite that day, so we visited him at another Rogue property, but not before discovering that Rogue, too, had a Tiki Tuesday. The deal was that anyone walking in wearing a Hawaiian/tropical shirt would get a free beer. Mine was locked away in the rental car a block away. Ah, well. After much travel, it felt good to sit and enjoy a cool beverage and I wasn't about to go get it.

Dalay had other ideas. Not one to pass up a good deal, he asked for the keys and disappeared. About five minutes later, who should stroll through the front door talking smack about free beer? I wasn't sure because I had one hand cupped to my ear, leaning in, and trying to make out what he was saying over the loud, loud shirt.

Posted by Matthew Rowley at 8:08 AM