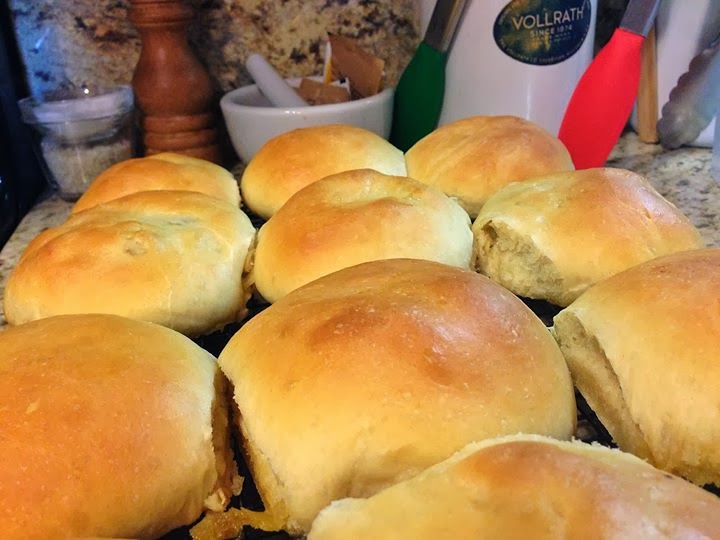 Posted by Matthew Rowley at 8:03 AM

I'm unclear on "Form the dough around the filling to make round rolls". Do you just kind of pinch together the round at the top? In the pic, the bierocks seem to have a smooth unbroken top.

Also, (and maybe this is a local font issue) the degree signs in the body text have been rendered as zeros, making for some eye-popping temperatures.

Those would, indeed, be some crazy temperatures. The weirdness, as is so often the case, was on my end. Thanks for the catch, Sylvan.

Also clarified the dough/roll issue in the copy. See above. TL;DR? Pop the filling into a round of dough, form it into a ball around the filling, pinch the seams closed, then place them — seam-side down — on the baking tray.

Thanks for the clarification. Not sure I'm ambitious enough to attempt these (although they sound worth it); I just had the childlike "How does the filling get in there?" question.

And it's a completely reasonable question ~ I'd just overlooked that simple direction. The trick may be convincing someone *else* to make them. Or find Portland-area Mennonites who need a little nudge into bake-sale territory.

Adding this to my recipe book, even if I'm not of volgar descent.

"Those would, indeed, be some crazy temperatures."

Glad you clarified that, because I ain't buying a kiln just to cook these things. ;)

(and Evernote, btw, is the perfect solution for keeping my recipes together and keeping my laptop out of the kitchen!)

Though not of Volgar descent myself, RumDood, I have been called a vulgarian on one or two occasions. I'd like to say this is a family recipe, but no: it's just a basic version that hits a lot of the taste memories from undergraduate days. If I were to strip it down to the essentials, I'd ditch the spices other than salt and swap put ground beef for the sausage — but, then, I've always liked a little something extra.

Gwydion ~ A kiln is overkill, but when we considered what to do with the back yard of the new house a few years ago, I did propose a brick-floored, wood-fired oven. That may yet happen. The smokehouse and stillhouse are less likely — even when I proposed that excess heat from both could warm a hot tub (which I kinda want, but pretend I don't so I have a bit more negotiating room). And as for Evernote: between that and Scrivener, the way I compose longer pieces has definitely gotten streamlined (though I'm still a sucker for pens, pads, and longhand). Evernote's been particularly good for recipe retrieval.