[Note: Regular readers will recognize this post as an old one from 2010. Why the repost? Because I'm a jackass. Not ten minutes ago, I accidentally deleted the original post. A hyperextended finger has made me clumsy. Fortunately, in my paranoia of losing data, I keep duplicate backup XML files of the blog in separate locations. Today, those backups paid off. All the great comments and the Facebook 'likes' are gone, but the notes and recipes are restored. With no further ado, here's the original piece.]

I was vaguely aware that common modern marshmallows — the confectionery cushions one finds in S’mores, Rice Krispie treats, hot cocoa, and, regrettably, on cooked sweet potatoes — don’t contain any of the obscure marshmallow plant. “Yeah, yeah,” I thought, “There’s a plant, there’s a candy. Not the same.” But I’ve been increasingly curious about medicinal marshmallow plants and I wanted to learn for myself whether they might have applications for mixed drinks. After all, we use some pretty funky medicinal plants in bitters and syrups. Why not use this one? So I got my hands on actual marshmallow root.

It turns out that marshmallow is…odd. For millennia, the roots of Althaea officinalis — a mallow plant found near salt marshes, hence the name — has been used in medicine and confectionery. Ancient Egyptians are said to have used the roots as both medicine and candy. The reason — and it’s the reason I say that marshmallow is odd — is that the sap in the root is gooey. Until gelatin became a popular stabilizer in the 20th century, confectioners used the plant’s natural gooeyness to stabilize and flavor a soft candy named after the plant: marshmallow. In French, it’s guimauve for both the plant and the candy. As in the US, the connection these days is in name only. 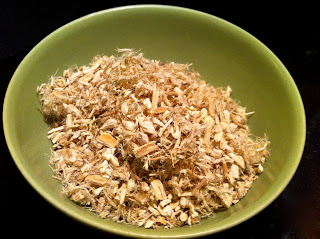 The cut root I purchased was perfectly dry and felt like any other root or shredded bark. But wait. In water it became mucilaginous; a thick, colloid, almost ropy syrup formed as the infusion sat overnight. Dry, it had just the faintest musty smell. Once it got wet, the smell was, well, rooty. Seriously. Smelled like someone had been digging up the garden. Before I added any sugar to the infusion, it had already formed a mildly sweet syrup.

That mucilaginous thickness has long been regarded as excellent for helping to soothe sore throats. I’m less interested in marshmallow’s purported medicinal properties, though, than I am its culinary applications.

Taking a cue from French cooking manuals, I decided to make a batch of Sirop de Guimauve with actual guimauve. The syrup is sweet, of course, but it also provides a supple mouthfeel not unlike gum Arabic, adding body as well as flavor. The taste is woodsy, bosky. There’s a fleeting impression of violets, but that passes and is replaced by a general sense of something vaguely old-fashioned. I mentioned to friends that it was like something once tasted, but long forgotten. My first taste reminded me of the paradoxical feeling I had at my first taste of black truffle; I’ve had this before.

I’ve tried the syrup successfully in a few drinks such a simple daiquiri and in a Tom Collins. Pairings with gin seem especially promising — whiskey less so. My emerging rule of thumb is to use about 75% marshmallow syrup as I would sugar syrup in a drink. It is a notably thick syrup. The first time I poured it from a bottle, I used a knife to cut the end of the pour. That turned out to be overkill; just stop pouring before reaching your desired quantity and the amount in the jigger may well pull out the rest of the volume you need from the bottle.

The first recipe came from Phaidon’s reprint of Ginette Mathiot’s massive cookery tome, I Know How to Cook. A standard in France since the 1930’s, Mathiot’s book covers over 1,400 recipes, including drinks. Her recipe is from this first American edition.


In Élixirs & boissons retrouvés, Gilbert Fabiani offers a similar recipe. My translation is below. The original French follows because my French is entirely self-taught and is, admittedly, a mess. Feel free to correct it.

With 75 grams of the root, ½ liter of water and 1 kg of sugar. Wash the root well and cut it into little pieces. Cover with boiling water and let it infuse for 24 hours. Strain, add sugar and cook over low heat for 10 minutes to ¼ hour. Check the consistency of the syrup, which will adhere to the edge of the pot as it cools. Put in bottles and refrigerate or sterilize them for ½ hour for a long shelf life.


My final version is essentially a 2:1 rich syrup flavored with, and thickened by, Althaea officinalis.

Place the cut marshmallow root in a large jar or heatproof container. Bring the water to a boil and pour it over the marshmallow. Cover and let this infuse for 24 hours. Strain, pressing on the solids to extract as much liquid as possible, into a clean pot. Over medium-high heat, add the sugar to the marshmallow infusion and stir until it dissolves completely. Pour into sterilized bottles and refrigerate.


If you make a batch for yourself — or already use marshmallow syrup in mixed drinks or cooking — let me know, eh? I find this stuff is promising, but would love other ideas about how to use it.

When the zombielypse/armageddaflop/2012y2k/logan'srunathon takes place I would like to come live in your well-stocked bunker please.

One thing is certain: we shall not go thirsty.