The Coming of Red Likker to Kentucky

In 1929, as the failures of Prohibition had become manifest even to the most ardently braying temperance hounds, the prolific American author and inveterate blowhard Irvin S. Cobb published Red Likker, his love letter to bourbon and Southern honor. It is not a particularly rare book. It is not a particularly good book. But I've hung onto my first edition for decades because it deals with whiskey — a topic dear to my heart —and for Cobb's brazen manhandling of the English language, which is at turns entertaining and appalling. He does not present the South so much as a caricature of the South. 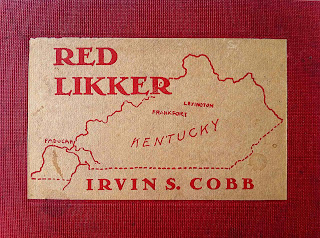 The novel concerns the fictional Bird family of Kentucky and in particular Colonel Attila Bird who distilled a great deal of the red likker in question and who lived long enough to see Prohibition descend on America. In my mind, his voice hovers somewhere between that of the 1940's Senator Beauregard  Claghorn and that of Mel Blanc's diminutive Kentucky colonel from Dog Gone South. In other words, he's a joke, son. Or at least comical, though Cobb, a Kentuckian. no doubt intended to impart almost heroic qualities.

In an early section, Cobb describes an exchange from the 1790's between brothers Isham and Shadwell Bird. Before then, the whiskey with which the brothers Bird were familiar was white, none of this fancy barrel-aged stuff we take for granted more than two centuries on.

In his hand Isham held what Shadwell had bade him seek for in the saddle-bag. It was a wickered case-bottle, stoppered with a corn-cob.

"Tried it yet?" said Shadwell, his voice thickened,

"Well, you'd best not lose any more time then. It's prime. Man, I tell you it's just prime! Primest ever I swallowed anywheres or any place."

"Likker. What else would it be but likker?"

"But it's red!" Isham was holding the flask up to the west and through the meshes in the plaiting the glass, by reason of its contents, showed him a deep russety-amber shade. That was puzzling.

"Shore, it's red. That's the joke about it. Red as stinkabus rum, e'en near it, yet powerful well-flavored. Take a swig and then tell me if it ain't about the potentest likker ever you put lip to."

Posted by Matthew Rowley at 8:52 AM