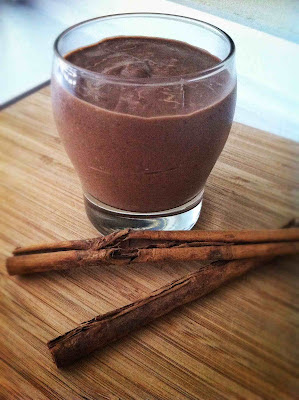 This summer, noted one of my young friends, has been so hot that you've got to take your shirt off just to think. Certainly, it's been so hot that we keep the stove off as much as possible, lighting it maybe once a day to bang out a few things at once, things  that will keep; iced tea, for instance, or a quick vinegar dressing for cole slaw.

I've never enjoyed particularly intricate desserts. As  demanding as I can get in my cocktails and liquor, my tastes for dessert are decidedly straightforward — pies, cakes, ice cream, brownies, cookies. That sort of thing. Wholesome, uncomplicated, good ol' 'Murcan food.

Except, of course, if you've visited here before, you know that I don't live far from downtown Tijuana and my tastes reach far beyond our American shores. Yes, I like simple desserts, but they may be flavored with vanilla, pandan, cardamom, kafir lime, lemongrass, a range of flavors from homey to exotic. Mexican chocolate is one of those tastes I like and I deployed it this weekend in a simple pudding. This type of chocolate comes in dense discs laced with sugar and canela. Canela is the soft, fragile, true cinnamon (Cinnamomum zelanicum) from Sri Lanka that is ubiquitous in Mexico. What Americans know as cinnamon is actually the dried bark of the more strongly flavored and sturdy cassia (Cinnamomum cassia), a species of laurel tree whose dried, clove-like buds are called for in a number of old bitters recipes.

Right. Enough of botany. Ibarra and Abuela are two readily available brands of Mexican chocolate sold in American grocery stores. If you can't find them, you can follow the directions below using bitter or semi-sweet chocolate and a bit of ground cassia (or, better, if you've got it, canela). It's not necessary to pulverize the chocolate completely, but do break it into small pieces so it melts more readily. Use a box grater, a serrated kitchen knife to shave off pieces, or — as I do — show it who's boss with hefty butcher's cleaver.

In a medium metal mixing bowl, whisk together the sugar, cornstarch, and salt. Add the milk and cream (or use all milk) and whisk briefly until thoroughly combined. Make a double boiler by placing the bowl over a pot of simmering water, making sure the bottom of the bowl does not touch the water.

Stir occasionally with a spatula, scraping the sides, for 15 to 20 minutes, When the pale mix is thick enough to coat the back of the spatula, add the Mexican and semi-sweet chocolates. Stir only enough to assure the chocolates are melted and thoroughly combined.

Remove from the heat and stir in the rum and vanilla. Pour immediately into serving cups or a single one-quart/liter dish. Cover the surface of the pudding with plastic wrap (unless you prefer a skin over the top, in which case, don’t let the plastic touch the surface), let it cool a bit, and then refrigerate an hour or two to chill.

Serve plain, with whipped cream, or a few fresh gratings of canela (the softer, more fragile, "true" cinnamon sold in Mexican markets). Or all three.

Posted by Matthew Rowley at 9:20 AM

Thanks. Made 1/2 recipe with combination of cream, whole milk, and evaporated milk. Pushed the mixture through a sieve before chilling to remove any Ibarra or corn starch lumps ( a few but not many!). Nice way to use up a few older Ibarra discs I found in my pantry.