Moonshine Monday: Uncork that Pig's Ass and Have a Go at It

One look at their upended pig-shaped bottle with a cork jammed in its ass and you realize that Mick and Michael Heston have a sense of humor. What is not as readily apparent is that the West Virginians are paying homage to an old American tradition. 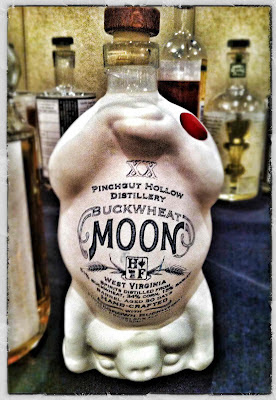 Many of toady's more fanciful bottles hold tequila — calaveras (skulls), the Republic of Texas, machine guns, and the like, dripping with testosterone and machismo — but in the late 19th century, some American distillers offered their whiskey in bottles shaped like fat, jolly swine. Usually, these were glass, but pottery examples do sometimes surface. Randy Ludacer shares photos of a variety over at the packaging blog Box Vox.

Why swine? Well, pigs — especially white ones — have long been associated with wealth and luck. Fat, happy pigs have been deployed as mascots in European and American advertising almost since the field's advent, selling everything from candy to, sadistically, sausage, hams, and bacon. Pigs also have an historic association with distilleries; for centuries, savvy distillers raised pigs in lots next to their stillhouses and fed them on spent grains. Selling off the litters added a welcome line to the account books at the end of the year.

Like fez monkeys, pigs also stand in as humans, filthy examples what what we're supposed not to be. Pouring from the rear end rather than the mouth just encourages more coarse joking. Men, after all, are such pigs.

The Hestons' Buckwheat Moon is made of 51% buckwheat with the balance of the grain bill corn and barley. Hats off to them for some fun whiskey* packaging. As it is for most craft distilleries, distribution is limited, but check out the website below to see if they can hook you up with a source in your area.

Posted by Matthew Rowley at 9:18 PM