So Trashy: Raenelle vs Betty Sue on Peanuts and Pepsi 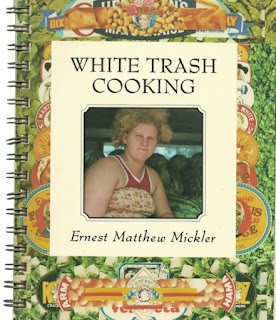 A few days ago, Lee Zalben over at Serious Eats ran the piece Ever Tried Peanuts in Coke? Well, obviously, yes. But memories of my own youth in the American heartland aren't what popped to mind when I read it. No, what sprung to mind immediately was a little side note about Raenelle and Betty Sue over a high calorie pick-me-up in Ernest Matthew Mickler's classic White Trash Cooking.

Try this on hot days when your cardboard Good-Shepherd fan makes you even hotter.

Betty Sue says: "This is a life-saver before Sunday dinner and just after church, when it's so hot you cain't hardly stand it!"

Essentially an old-school milk shake from back when they were simply milk, shaken. The sugar substitute, though, knocks it over into the realm of the vile. If you think so, too, perhaps something with a little more substance is your speed...


HIGH CALORIE PICK-ME-UP
Pour a small bag of Tom's peanuts into a cold Pepsi. Turn it up and eat and drink at the same time.

Raenelle told me that this was one of Betty Sue's concoctions. She said: “But it's so trashy she won't own up to it!"

Posted by Matthew Rowley at 4:26 PM

apropos to nothing, but a really funny public service announcement from HP Lovecraft.

Well, butter my biscuits, Randall ~ You are an imgurian? Come over here. You can sit at our table.

My Mom used to make the same thing, only with sugar and a whole egg and called it eggnog, and it was sublime.

I own this book! It's a hoot and reminds me of when I lived in Florida. MaryO