Treat this one with the respect it deserves, gentlemen.
~ Charles H. Baker, Jr.
Charles H. Baker, Jr. — bear with me, drinks people; I know you know this, but others may not — is a towering figure in cocktail literature. His 1946 two-volume The Gentleman’s Companion was one of the first serious cocktail books I bought almost twenty years ago. Because bars sometimes base cocktail programs on his recipes more than half a century after publication, a passing familiarity with them helps tipplers navigate options at bars that trade in old-school drinks. 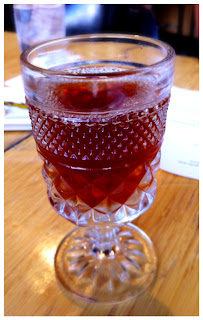 This weekend in Portland, I was pleased to recognize Remember the Maine, one of his classics, featured at Teardrop Lounge. It's not unlike a Manhattan, but with an absinthe kick, you wouldn't mistake one for the other. The drink's name refers a popular slogan that decried the sinking of the battleship USS Maine in Havana's harbor, thus sparking the 1898 Spanish-American War. Baker invokes the slogan in his typically florid and heavily-capitalized prose:

REMEMBER the MAINE, a HAZY MEMORY of a NIGHT in HAVANA during the UNPLEASANTNESSES of 1933, when EACH SWALLOW WAS PUNCTUATED with BOMBS GOING OFF on the PRADO, or the SOUND of 3" SHELLS BEING FIRED at the HOTEL NACIONAL, then HAVEN for CERTAIN ANTI-REVOLUTIONARY OFFICERS

His original recipes reads: Take a tall bar glass and toss in three lumps of ice. Onto this foundation donate the following in order given: one jigger good rye whiskey, ½ jigger Italian vermouth, one to 2 teaspoons of cherry brandy, ½ tsp absinthe or Pernod Veritas. Stir briskly in clock-wise fashion -- this makes it sea-going, presumably! —turn into a big chilled saucer champagne glass, twisting a curl of green lime or lemon peel over the top.

That "cherry brandy" has caused some confusion — or at least room for interpretation — among bartenders since both Cherry Heering (a dark, sweet, cherry-infused brandy) and Kirsch or Kirschwasser (a clear distillate of cherries, nearly double the proof of Heering) may be used. I find the lower-proof Heering rounds out the drink nicely, but feel free to experiment. The drink doesn't call for much absinthe, but tread lightly if you're unsure whether you enjoy the taste; its presence is not a subtle one.

Stir briskly with a bar spoon in a mixing glass with ice. Strain into another glass and serve up.

Goes well with: A stop at Teardrop if you're in Portland. In fact, it's one of the reasons to visit.

Are Cherry Herrings those elusive red ones?

Agh! Fixed. So glad you could be part of the shenanigans. I, at least, got to sleep in until 7am the next day. Though with that damnable Portland light, it seemed like the sun had been up for hours at that point.