When a Man Named Tiny Fries You Pork, You Eat It

Parsing the distinctions between grieben, chicharron, lardons, scratchings, grattons, and cracklins — not to mention which are for snacking and which are for seasoning other foods — can sometimes result in raised voices. Commonly made of pork, duck, chicken, or goose, these little fried pieces of fatty animal bits can be an unavoidable consequence of lard rendering…or the entire point of the firing up the pan in the first place. 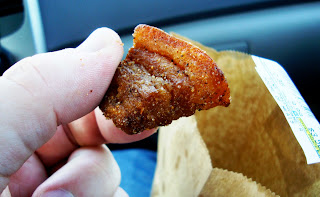 One of the reasons I like driving around South Louisiana is the local food, especially the charcuterie. In fact, if you happen to be in New Orleans for Tales of the Cocktail next month, book a few extra days and head west into Cajun country. Whether it’s a family-run watermelon stand, fresh shrimp, or just one guy selling Creole tomatoes out of his truck, be prepared to stop wherever the offerings look good. Bring a cooler.

But the look and smell of his cracklins pulled me over as soon as I walked in the door. Crisp chunks of pork — a bit of skin, fat, and meat in every piece — were seasoned with hot pepper, salt, and pepper. They were fantastic.

Oh, and there’s a drive-thru. Unless you know for sure what you want, though, park it and go in. Tiny’s no dummy: he sells Styrofoam coolers, too.

Posted by Matthew Rowley at 2:09 PM