Plugged For Your Pleasure: The Melon-Aged Cocktail

Barrel-aged cocktails are all the rage these days in certain circles and I can attest that some of them are hands-down delicious. But consider for a moment the melon-aged cocktail. Or is it the cocktail-aged melon? Either way, it's a winner.

From the highbrow (Charentais melons splashed with port wine) to the low (tailgate watermelons spiked with whatever liquor is handy), alcohol and melons have long enjoyed cozy relations. Since by trade and inclination, I travel in both rarefied and more earthy circles, I combined them recently in the form of a simple backyard watermelon infused with fancy punch. Admittedly, the aging in this case is simply overnight, but it's enough to give the alcohol a smoother, vaguely sweeter, edge.

And not just any punch: arrack punch, a funky, rum-heavy concoction once common in the flowing bowls of previous centuries, but little seen in the last 80 years. There's no reason, however, that you couldn't spike a watermelon with a pre-made cocktail: say, 8-12 ounces for a 10-pound melon. An enormous margarita, perhaps, or if you favor tarter tastes, a massive Negroni. 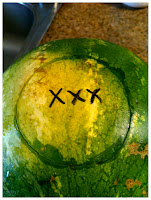 Until recently, the primary ingredient for the punch I chose — Batavia arrack — was no longer available in the United States. However, thanks to importer Eric Seed at Haus Alpenz, the 100 proof Indonesian spirit made of fermented rice and molasses is once more available. Combined with Jamaican rum, lime, sugar, and tea, it's just the thing to add a lightly boozy and slightly Baroque touch to Independence Day cookouts.

For this preparation, cut a round hole in the top of a chilled watermelon. Why round? Because a square hole may sometimes lead to cracks spreading out from its corners. Gently remove the plug and trim away most of the red flesh from its interior. Next, remove a small amount of flesh from the melon itself: just a small amount, enough to make a small cavity to hold liquor as it seeps into the flesh.

Then slowly pour liquor into the hole. My 11-lb melon easily absorbed one cup (250ml) of punch. It may help to pour in 2 ounces at a time, wait until that is absorbed, then add more until the melon just can't take any more. You may also speed the process by gently inserting a bamboo skewer at various angles into the flash — though be careful not to puncture the rind at any point. It seems obvious, but: leaks. Replace the round plug and keep in the refrigerator until you're ready to serve.

Note that the purpose of this particular melon is not to get you staggeringly drunk, but rather to showcase complementary tastes. After all, it's less than an ounce of punch for each pound of melon. If the staggers is what you after, consider straight rum, vodka, tequila, or Confederate chloroform. Any way you slice it, you're on your own.

Confederate chloroform? Why, it's just moonshine. We get that around here, too.
Posted by Matthew Rowley at 7:21 AM

Awesome and geeky and most likely tasty! i wonder if there´s any way to scale this down to just one drink, i ain´t got that n
uch of the arrak left and no way to get another bottle.

Maybe by cutting out small pieces of watermelon and let them sit with 2 oz of arrak? maybe that could be used in a tiki drink...

I hadn't thought about doing it like that, although your description is starting to sound like something in the family of pisco punch. The inspiration for this was a batch of arrack punch I had left over for an article I wrote for a magazine. Let me know if you decide to go with your tiki punch idea. I like the sound of that a lot.

Matt - love seeing this creative use of Batavia Arrack. I was lucky enough to distribute the Haus Alpenz line in WI for a short while and grew to love many of those spirits, particularly some of the liqueurs. I made some wicked punches with the Arrack featuring Death's Door White Whisky.

As a previous poster mentioned, creating drunken watermelon with the arrack is a great idea for a garnish. I'll give it a try.

Oh, and a shout out to SoCal!