No other magazine presents such a broad and deep understanding of who and what shapes modern tastes in spirits than CLASS Magazine. Malt Advocate focuses on whiskey (an admirable concentration). Wine & Spirits covers, well, at least one subject other than spirits. Imbibe addresses drinks more broadly and so includes tea, coffee, soda, water, and others. I like them all. But CLASS is spirits all the way. Oh, and the occasional beer, aperitif, and dash of bitters. Geared toward professional and avocational liquor enthusiasts, it includes product reviews, bar and bartender profiles, in-depth historical research, distillery and distiller profiles — and lush, gorgeous photography. 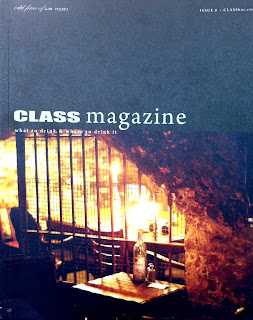 CLASS (yes, it is an acronym capitalized like that, leading some wags to dub it CRASS) is the brainchild of Simon Difford. Founded in 1997, Difford’s magazine quickly became an authoritative voice on the London bar scene, but its audience since has grown beyond the boundaries of the City. The lean is slightly European and heavily "cocktailian." Having once sold the rights to the magazine, Mr. Difford reacquired them in 2009 and has been publishing it since then.

I’ve a stack of these things at home. Heavy, thick, black tomes that dominate the shelf. Articles of the past few years have explored online merchant The Whiskey Exchange, Galliano cocktails, Scottish and Caribbean distilleries, the origins of the old fashioned cocktail, bartender kits, drinking guides to cities around the world, and hundreds of recipes. Particularly bad products get pilloried on a page of their own.

Generally, I'll tear out relevant articles from journals or magazines rather than keep the whole thing, then file them away in appropriate cabinets and folders in my research library — foie gras harvesting in here, citrus genetics over there, corn whiskey and reprints on pepperpot in another area entirely. I've never cut apart an issue of CLASS; each has been so engaging that I've kept it in its entirety.

I offer only one minor caveat; the copy is prone to typos. It's an annoyance to read an engaging, well-researched, beautifully photographed piece and smack into yet another cognitive pothole of the wrong word (guilt, for instance, rather than gilt). But, then, if I had a dollar for every typo I've ever published here, I could easily buy that Munktiki mug I've had my eye on. A two-year subscription to CLASS  runs £70 runs £70. £45 gets you one year. If neither of those options suits you, an online version recently launched here.

Mr. Difford will sit on a panel next month at Tales of the Cocktail. Joined by globetrotting bartender Nicolas de Soto and cocktail guru Jonathan Pogash, the three will present The European Bartending Perspective. Details here.
Posted by Matthew Rowley at 9:23 AM

Labels: bookshelf, Tales of the Cocktail

I enjoy Class very much too.
I guess some key aspects that keep me hooked are related to design. The photos are mazing and the way they place ads in the magazine is quite not intrusive and cluttering. The paper quality and the finishing are much superior to others too.
Last week we were commenting here at the office on how clean their design project is compared to other related publications.

The archivist in me just hates tearing out articles from various magazines. Something on sardines from Food & Wine, something about hotel bars from Business Week, something else about oranges by Anthony Burgess from the defunct Gourmet from half a lifetime ago, even if I feel a twinge of guilt (or, perhaps, gilt). I can tear all of those for my research files. But Class? I haven't been able to bring myself to rip a single page from any of them. If I should ever get rid of them, I shall give them, whole and complete, to some young boozy upstart.

let´s see what the new format is going to bring us...

I REALLY hope the change is for good