Ever since Japan’s triple disasters earlier this year, I’ve been getting in as much as I can about Japanese cuisine; this new direction is reflected, predictably, in a growing accretion of books and bottles. 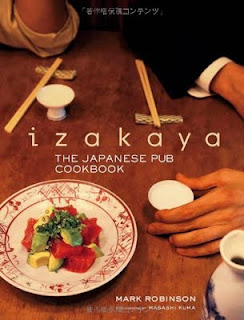 To my pile of books, I recently added Mark Robinson’s Izakaya. It’s a few years old now, but the book is so engrossing that I read it cover-to-cover on a flight to Salt Lake City. The future of Japanese whisky in the wake of this year’s tsunami originally sparked my interest in that country’s distilleries. That initial concern has grown into a broader interest in Japanese eating and drinking habits — in which I am far from expert.

It’s not that I am wholly unfamiliar with Japanese food. After all, friends live in Japan and we have a handful of Japanese markets nearby. But I lean to big, bold flavors and would rather eat any number of Vietnamese, Thai, Lao, or regional Chinese dishes than yet another Southern California sushi roll. Of course, Japanese cuisine is more than sushi, sake, and Sapporo — but it’s a pity we don’t have more authentic izakaya to help us understand the bigger picture.

Robinson is an Australian journalist based in Tokyo. He clearly has spent considerable time in izakaya (pronounced roughly ee-ZAH-ka-ya), small Japanese pubs that are as much about food as they are drink. In fact, he offers “pub” only hesitantly as a translation. Here he sets the scene for one of his favorites and the first of eight profiled in the book:


Every neighborhood deserves a Horoyoi.

Amid the babble of nighttime Ebisu, in southwestern Tokyo, among the mind-numbing array of flashy restaurants dueling for customers, their touts playing the streets, this diminutive semi-basement izakaya has been a fixture in my life since the early 1990s.

I never consciously made it so. Indeed, it was years before I realized that Horoyoi had grown on me — or I had grown into it — to the extent that I relied on it as much as the average Japanese might his or her own “local”: as a modest, welcoming place that came instantly to mind whenever I was arranging to eat and drink with friends and colleagues; to casually celebrate birthdays and New Year’s; to entertain relatives; or to introduce newcomers to izakaya. Over time, I found that it had transcended its status as an occasional destination to become a regular venue for marking some of my life’s milestones: a personal repository of good memories. With minimal décor, reliable, simply seasoned food and cool-headed service, it was a place where I felt at the same time comfortably well known and sufficiently anonymous to be completely myself. I could bring whomever I please, stay as long or short as I wanted, ask questions about the menu, be gregarious, or simply sit and observe. And that’s what the best neighborhood izakaya should be.

He goes on to give about a dozen recipes from Horoyoi and about as many again from each of seven other spots. The recipes range from almost down-home comfort food to a handful of more complex dishes. It would be a mistake, however, to describe any of the recipes as particularly complicated. Pork, noodles, clams, tofu, and potato salad (yes, potato salad) are almost old hat to Western eaters. For ingredients that may not be so familiar, Robinson includes photos and descriptions — wood ear mushrooms, gardenia fruit, yuzu, daikon radish sprouts, wagarashi (Japanese hot mustard), shichimi spice powder, lotus root, and more.

Some of the highlights include asparagus and pork tempura rolls, soy-flavored spareribs, chicken gizzards, cucumber pickles, duck breast with ponzu sauce, miso-cured tofu, steamed and grilled pork with salt, deep-fried tilefish, and the bizarre —but no less intriguing — Raclette-stuffed deep-fried tofu. There’s not one single thing in this book I wouldn’t eat.

This year’s tight travel budget means I have no immediate plans to visit Japan, but I am laying plans to come drinking and learning what to eat with those cocktails I’ve been hearing so much about the past few years.

In a sauté pan, lightly toast the tea over low heat until fragrant. Pulse to a powder in a food processor. Bring water to a boil in a medium saucepan. Blanch the walnuts for one minute and strain. Toss with sugar while hot.

In a large saucepan, heat the oil to 430ºF. Have ready a baking sheet lined with parchment paper. Deep fry the walnuts until the sugar caramelizes, about 4-5 minutes, then transfer to the baking sheet. While hot, sprinkle with the tea powder and toss well. Separate the walnuts and let them cool completely. Store in an airtight container.

Wow, the pu-erh glazed nuts sound amazing. Although I argue that Earl Grey is not a substitute -- it's sort of like swapping Grand Marnier for the recipe's Cynar.

I agree 100%. Earl Grey is not a bad substitute in that it provides a distinct flavor to the finished nuts, but in no way does it stand up to the funky earthiness of pu-erh. I imagine that Robinson put that in because Earl Grey is a widely available flavored tea — but pu-erh can be found readily enough even at Whole Foods and most specialist tea shops.

That stuff all sounds absolutely fantastic. Except the wood-ear mushrooms. Hate those rubber band things. Might have to check out that Raclette stuffed tofu.

As for the pu-erh walnuts, I'd say swap out for an oolong tea if you can't find it. Still got that earthy, aged funk going on to it and it's available almost anywhere.

Good call on the oolong, Scott. It's one that even most neighborhood grocery stores should carry.