Bookshelf: A Taste for Absinthe

In the mid-1990’s, resources for drinkers were nothing like what’s available today. Unless you were a collector of out of print booze tomes and bartenders’ guides, Mr. Boston’s little red book was about as good as it got. If your tastes leaned to the esoteric — moonshine, say, or absinthe — you were especially hard-pressed for reliable information in the United States. At least good moonshine could be found. Recipes for making ersatz absinthe, on the other hand, yielded universally wretched results. 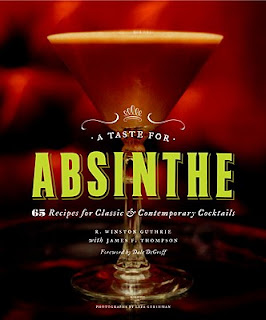 I know. I tried as much of both as I could get my hands on. Most of the moonshine I kept. Most of the absinthe I gave away.

Now that absinthe is once more readily available in the US, it’s been showing up for the last several years in homes and bars that value in well-crafted cocktails. Some serve venerable cocktails, culled from the pages of pre-Prohibition bartenders’ guides. Others also pour more recent creations. R. Winston Guthrie and James F. Thompson’s A Taste for Absinthe examines them both and starts to answer the unasked questions: what the hell is this stuff and what do I do with it?

Guthrie is an absinthe expert and founder of Asbinthe Buyers Guide (see below). The book holds little new information for absinthe aficionados, but for curious novices it's accurate and truthful. Don't dismiss the value of that. With absinthe largely unavailable to them for most of the 20th century, Americans lost what little we knew about the stuff. As remaining stocks dwindled, myth and misinformation took hold. It was, rumor said, a poison. It caused hallucinations and madness.

The truth is far more mundane. Levels of thujone, the chemical said to drive men over the brink of sanity, were claimed by prohibitionists to have been outrageously high in pre-Prohibition absinthes. Modern forensic analyses of unopened bottles show that they weren’t. Whether or not thujone broke minds, it wouldn’t so do in the concentrations found in either classic or modern absinthes. The authors write:


In extremely high doses, thujone is dangerous, but the concentration of thujone actually found in the beverage absinthe is nothing to worry about. You would need to drink seven liters [!] of the undiluted spirit to have any adverse effect directly from thujone. The alcohol, and even the water [if you diluted it] would kill you before!

After dispensing with history, defining characteristics, tools and accoutrements, A Taste for Absinthe dives into 65 recipes of old and new drinks featuring the green fairy. The book wraps up with a buying guide — somewhat dated, but still a good place to start — for brands widely available to American shoppers. 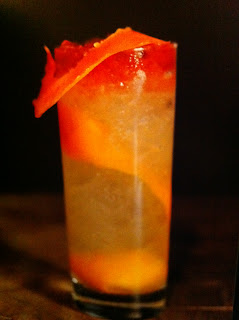 Its recipes come from professional bartenders such as Jason Littrell, Neyah White, Daniel Hyatt, Eric Alperin, and Jeff Hollinger. You’ll find suggestions of mixing absinthes with mezcal, Lillet, fruit juices, egg whites, rum, honey, bison grass vodka, vermouth, rye whiskey, genever, gin, apricot brandy, bitter orange marmalade, and even sweetened condensed milk. Ok, I erpped a little at the last one, but, honestly, if Jason Lograsso mixed a Strutters’ Ball and put it in front of me, I’d give it a go.

Meanwhile, I’m mixing just enough absinthe with some of the newish 45 proof Crown Royal Black into a whisky cocktail the authors dub North of the Border.

Pour the simple syrup, lemon juice, orange juice, absinthe, and whisky into a cocktail shaker. Shake well, and pour the drink into a Collins glass filled with crushed ice. Add two dashes of bitters, and serve.

Absinthe is great stuff. My adoring wife got me this book for Christmas, along with a fairy fountain. The book is beautiful but targeted more towards the absinthe newcomwers. My personal preferences is the classic louche, but the Corpse Revier no. 2 is a great absinthe cocktail. I also really liked the Dutch Flower at Craft and Commerce, which is a great spin on that cocktail. It swaps genever for gin and St. Germaine for Lilet Blanc.

Totally with you on the targeted to newcomers angle. That's what I was saying when I wrote "holds little new information for absinthe aficionados" — If you know your absinthe already, there is little groundbreaking here. As a cocktail book, it's a great little collection of recipes focused on one ingredient (well, ok, lots of different absinthes, but the same class of ingredient).

The CR#2, though, is one of my favorite drinks. I can always sell that one at home, even to my sidekick who'd rather eat a raw potato than drink a properly louched absinthe drip.