Honey Loquat and Elm Syrup to the Rescue

And by we, I mean everyone in the house except me. 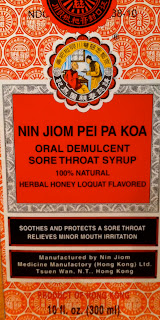 I'm also dispensing doses of Pei Pa Koa, a sore throat syrup from Hong Kong. I learned of this honey loquat syrup years ago in Philadelphia from Ben Robling — the same erstwhile cheesemonger who provided inspiration for a Dumpster grappa recipe in my book Moonshine. Ben and I were shopping in an Asian market when he spied a display of red boxes and seized on them as the best cough syrup he'd ever known. He, in turn, had learned of the stuff from an opera singer who took a preventive spoonful before performances as a throat-soother.

What the hell? Why not try some? It was South Philly where colds in the winter were more common than parking spots and anyone with a cough was to be avoided as if she had the zombie plague.

It turned out to be one of the best the best cough syrups I've ever known. I've never seen any in a Wal-Mart, Duane Reade, or Walgreen's, but the decorative red boxes are commonplace in US Asian supermarkets. The dark, almost molasses-colored, syrup has a hint of amber if you hold it up to the light, and tastes strongly of honey. Peppermint jumps out with noticeable licorice and ginger notes. There's a longer list of esoteric ingredients that reads like a Jerry Thomas bitters recipe, but the one that excites herbalists is elm bark, widely regarded as a demulcent — that is, a throat soother. It means nothing more than a medicine that makes sore throats feel better.

I have no illusions that Nin Jiom Pei Pa Koa (Nin Jiom is the Hong Kong manufacturer) will actually cure the stricken in my house, but if it makes them feel even a tiny bit better, they will continue to have some.

Amazon sells 300ml bottles of the stuff for a little over $15. Sure, you could buy it online. Or you could venture into the nearest Asian market and find some yourself. The 300ml bottle I picked up yesterday was less than $6.

And — me being me — you know I'm eyeballing that bottle and mulling over drinks ideas. There is, after all, that whole list-of-esoteric-ingredients-that-reads-like-a-Jerry-Thomas-bitters-recipe feeling that's hard to shake.
Posted by Matthew Rowley at 8:00 AM

Forrest, my man, you are onto something with that hot one. And just when I was thinking I might be making a bad name for myself by even thinking of combining booze and cough syrup in the same glass, you pull out a win.

As it happens, I have every single one of those things. I'll be like a boozy Florence Nightingale.

You're not combining booze and cough syrup. You're combining medicine with more medicine. We all know that alcohol is used to sterilize things so why not let it sterilize from the inside?