Want to cook Asian food at home, but aren't quite sure which cookbook to get? Got one for you: The Asian Grandmothers Cookbook. 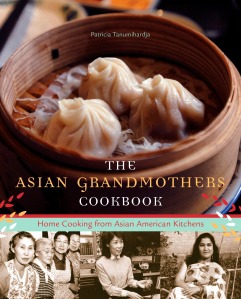 Pan-Asian cookbooks exist and some are great starting points to explore recipes or learn about ingredients. But in the end, many are disappointing because they are little more than catalogs of recipes from diverse cultures sometimes thousands of miles apart. Patricia Tanumihadja's book also draws from widely separated cultures, but anchors recipes to specific grandmothers and great-grandmothers whom she profiles in succinct little oral histories. It's these stories and their ancillary headnotes in the various recipes that really make the book shine.

We learn, for instance, about Kimiye Hayashi from Bellevue, Washington. Born in Pueblo, Colorado to Japanese parents from Hiroshima, she lived in Southern California at the time of the Japanese attack on Pearl Harbor. When Japanese Americans were being rounded up for relocation camps during the war, she fled to an abandoned farm, but was eventually put into an Arkansas camp with her family. Tanumihadja writes that while Mrs. Hayashi cooks hamburgers, fried chicken, and other typically American foods, she also scoured Japanese cookbooks — especially those from church groups — for recipes. "You want to eat something you want," she says, "you just learn how to do it."

She's hardly alone. Asian-American grandmothers from Thai, Filipino, Vietnamese, Korean, Chinese, Burmese, Lao, Indian, Nepalese, Indonesian, and other cultures contribute recipes for dishes that are representative not only of their ancestral homes, but of the American influences in their families' cooking. Somen salad, for instance, isn't traditional Japanese cookery, but the noodle dish with shredded lettuce and barbecued pork is a popular at many Japanese American gatherings. Then there's the leftover Thanksgiving turkey rice porridge.

There's banquet food, appetizers, comfort food, and more. I'm lukewarm about the recipes in so many cookbooks, but nearly every one in the Asian Grandmothers Cookbook makes me want to change dinner plans and fix that.

Posted by Matthew Rowley at 7:28 PM

What a cool cookbook. I'll have to pick that up.

Damon, I concur ~ I look at the shelves sometimes at food books I bought years ago and wonder what I was thinking. Those others may go, but this one's a keeper.

So fine, this idea. Because comfort food (and the story behind it) can be found in any culture. Thanks for this!