My entire life — other than occasional stints in Europe — has been spent in the company friends whose families hail from Oaxaca, Baja California, Sonora, and other parts of Mexico. Even today, I live a mere eighteen miles outside Tijuana. Some ascribe the affinity between Irish- and Mexican-Americans to similar Catholic upbringings. While not denying that possibility, I prefer to think that it is testament to how susceptible those of us with freckles are to the siren call of Mexican cookery. 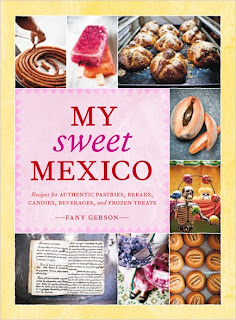 I have, for instance, dispatched an incalculable number of pigs in the form of tacos, guisados, sopas, tortas, enchiladas, chorizos, and various antojitos. My lust for fresh, dried, and smoked chiles leads to eating amounts that would shock (and likely render ill) my pale ancestors. Yet Mexican sirens are not all chiles and pork. Some of them sing songs of sweetness.

One such sirena is Fany Gerson, a Mexican-born pastry chef and author of My Sweet Mexico. Oh, sure, you may know about caramel-topped flan or the long, ridged donuts known as churros, but there’s a wealth of desserts, candies, sweet beverages, and snacks that, while ingrained in Mexican culture, just don’t get much play in the US. Gerson’s here to fix that. Rightly.
Traveling around her native country, the author gathered recipes for dulces de convento (sweets from convents), dulces de antaño (“heirloom” sweets) pan dulce (the ubiquitous sweet morning breads), fruits, various desserts, and frozen treats such as margarita ice, rose petal sherbet, and sorbets made of quince, tamarind, lime, and cucumber.
If you’re the slightest bit interested in Mexican food or sweets in general, Gerson’s book is a knockout. It has recipes for both traditional sweets (want to make your own Mexican chocolate tablets? Instructions included) and more complex modern desserts such as an original lime tart with tequila-plumped “drunken” cherries.
My Sweet Mexico brings together in one place a trove of the kinds of recipes you would have to cobble together from dozens of English-language cookbooks devoted to Mexican cooking. The tone is light, erudite, and engaging: the voice of an expert and one whom I would want to have over for dinner (and not just because she may bring dessert). 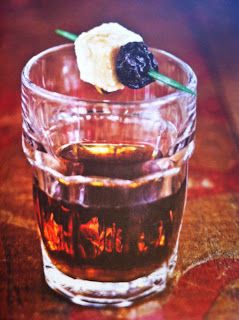 Drinks are not ignored. Sure, there’s an entire chapter devoted to bebidas, but pastry chefs, after all, are used to judicious use of spirits in their work. Gerson puts a Mexican spin on that tradition. Consider her recipe for gaznates (“windpipes”), light, cannoli-like shells filled with Italian meringue: the shells are made with brandy or rum — and the filling? Spiked with mezcal.
Don’t like windpipes? Try the jamoncillo de leche, a fudge-like milk confection that can be flavored with chocolate, lime, coconut — or reposado tequila.
Gerson’s recipe for pasita, a raisin cordial, was inspired by a bar in Puebla that serves its namesake tipple in a shot glass topped with a skewer of salty cheese and a raisin.

Pasita
(a raisin liqueur)
1.5 c/340g sugar
1 c/250ml water
3 c/750ml brandy
2 c/300g dark raisins
Combine the sugar and water in a pot over medium heat, and cook, stirring, until the sugar dissolves. Pour into a large container. Stir in about 1 cup of the brandy, add the raisins, and let macerate until the raisins plump, about 20 minutes. Add the remaining 2 cups brandy and cover tightly. Store in a dry, dark place for 2 weeks, Stain through a fine-mesh sieve or cheesecloth and store in a sterilized jar.
“Although this drink is typically served,” she adds “at room temperature, I like it a bit chilled. It will keep about 2 months in the refrigerator.”
~ Adapted from My Sweet Mexico to include metric measures.

Though well-researched throughout, Gerson tips her scholarly hand at the end by including a bibliography of nearly thirty titles, most from Mexico and nearly all in Spanish: a goldmine for those who want to read more.
Fany Gerson (2010)
My Sweet Mexico: Recipes for Authentic Pastries, Breads, Candies, Beverages, and Frozen Treats
224 pages, hardback
Ten Speed Press
ISBN: 1580089941
$30.00
Goes well with:
Posted by Matthew Rowley at 4:09 PM

I miss Mexican food so much, my trip back to the US will be as much about tracking down decent Mexican (in the DC area) as it is about seeing family and friends. I'm already getting strategic, and the trip isn't til the end of April.

Real Mexican. The only cuisine harder to track down than authtentic Vietnamese, in the south of France.