Leftover dessert? An alien concept. Put before me a cupcake, a slice of pie, a cobbler, crumble, grunt, slump, cookies, ice cream, cake, tortes, tarts, stolen, krapfen, baklava, cannoli, pudding — or, face it, nearly any sugar-egg-flour combination — and I will eat it down to the plate. None of this “just a taste” nonsense. 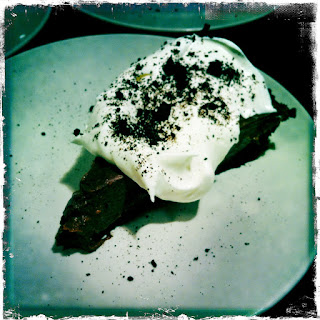 The flip side is that, because I know I’ll devour sweets, I don’t keep them around the house. If we bake cookies, friends, neighbors, and co-workers taste the bounty. Red velvet cake? Half of the last one I made was claimed by a friend 30 minutes after it was frosted.

The chocolate pie should have followed the same path. It didn’t. Naturally, everyone in the house got a slice, but then we repeated until all that was left was a pie pan smeared with chocolate and tiny black crumbs.

This was originally a Martha Stewart recipe and, except for the liquor, a pretty typical diner-style pie, but I tweaked it a bit and swapped out her suggested whiskey in the pie with Dos Maderas PX, a flavorful blend of aged Barbados and Guyana rums. After basking five years in used bourbon barrels under the Caribbean sun, it’s shipped to Jerez, Spain for five more years in two different sherry barrels. Score a bottle if you see it. I often sip it just neat. And because a rum-laced pie’s not enough, I spiked the whipped cream with some of it as well.

Is it any wonder we ate the whole damn thing?

Pulverize the cookies in a food processor. Transfer the resulting fine crumbs to a medium mixing bowl and stir in the sugar. Add melted butter and mix with a large mixing spoon or spatula until the entire mixture looks and feels like soft, wet sand.

Turn crust mixture out into a 9-inch round pie plate. Using the back of the spoon, press the mixture evenly into the bottom and up the sides. Transfer crust to freezer.

Make the filling: In a medium saucepan, whisk together sugar, malted milk powder, salt, and cornstarch. Add the egg yolks and whisk until combined; mixture will look like a thick paste.

Add chocolate, rum, and vanilla; whisk until well combined and mixture has cooled slightly. Let stand, at room temperature, for 15 minutes. If a thin skin forms on the filling while cooling, whisk until skin is gone. Remove the pie crust from the freezer and pour the slightly cooled filling into the crust. Refrigerate for 4 hours before serving.


Serve with whipped cream lightly sweetened and dosed with additional Dos Maderas PX. If you’ve got leftover chocolate wafer cookies, now is a good time to crumble one or two and sprinkle them over the whipped cream-lashed pie slices.

Posted by Matthew Rowley at 3:28 PM