New Orleans isn’t as hot as last week they tell me, but Dickie Brennan’s Steakhouse still has a sign on its revolving doors reminding patrons to use the side doors “due to weather conditions.” Fortunately, there’s no shortage of cool marble counters, air conditioning, ceiling fans, and whiskey. At Bourbon House, all of them came together yesterday (with a dozen palliative St. Bernard Parish dozen oysters to wash down my Galatoire’s lunch).

Regulars know that the house drink— made with Old Forester— is a frozen bourbon milk punch. On a muggy New Orleans day, it’s a grownup’s answer to the frozen daiquiri slushies one finds in other frozen hooch parlors and drive-troughs in the area. Somewhere between a milkshake and a smoothie, this comes with a bourbon kick that just hits the spot on days that’d wilt frail constitutions. 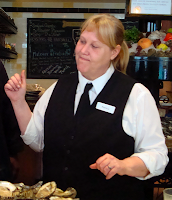 During Tales of the Cocktail, attendees are in for a treat. Bartender Patricia O’Neil has been adding fresh cantaloupe puree to the mix and she plans to have them new version around for a while. Now, there’s no denying the drink is on the sweet side, and I wouldn’t want to knock back four or five of them, but when the thermometer creeps higher and higher, the icy melon goodness hits the spot.

As of yesterday, the recipe was only one day old. It might be named something else by the time you belly up—but they'll know what you mean if you ask for a frozen bourbon milk punch with melon.