...professionals, students, bankers...would be watching a chicken
on a 10x10 board yelling in unison "SHIT! SHIT! SHIT!"
Ahh, you should have seen it.
The Chicken Drop was stupidity and senselessness
on a Herculean scale.

~ Brooks Hamaker
Grousing about New Orleans’ oppressive heat and humidity is all well and good, but if it weren’t for yesterday’s stultifying heat, my delicate mind would still bear a Chicken Drop-shaped hole.

As I approached Good Friends bar on the corner of St. Ann and Dauphine, the heat and sweat had put me in a mildly grumpy mood. Just in front of me, neighbors crossed into the cool interior with two large dogs. Turns out that Good Friends in the afternoon is the most dog-friendly bar I’d seen in the US. At least six meandered among the customers, lounged on the cool floor, and pretty much made themselves at home. At Good Friends, even the dogs were regulars. 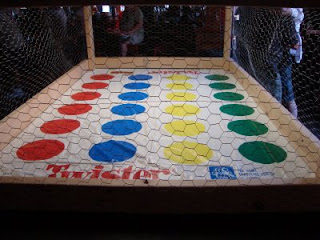 But the pool table stopped me. It was covered with a plywood board that had a Twister mat duct taped to it. The board was surrounded by a wooden frame enclosed by chicken wire. It was my good fortune to stumble across the lead-up to a New Orleans chicken drop—half gambling, half brazen ploy to get bar patrons to linger and buy more.

The Chicken Drop is simplicity itself. Around a setup similar to the one above, patrons place bets—or as at Good Friends, simply put their names down under red, green, blue, or yellow columns with no exchange of money—on where a live chicken will, well, dump. I bought two beers just in anticipation. 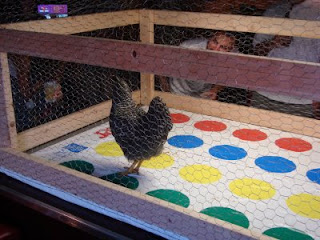 The assembled patrons gathered around to watch the live speckled hen gently removed from her carrier, then placed over the wire enclosure onto the board. The crowd jockeyed for positions around the table, guffawed, cheered, and tried to startle to chicken into prematurely defecating while she strutted over certain colors.

A few false starts as she bedecked the white spaces between the colored circles. Then, after about four minutes, gold. She dumped a huge number on yellow. I got a free beer, was all cool and refreshed, and the grump was gone.

I cannot wait until the Hamster Derby.

Fantastic. I am looking at my birds in a whole new light, and wishing I'd set this up on my lawn for the July 4th festivities.

From Brook's essay: "although they could find no specific rules about the handling of live fowl in bars . . ."

This is also a staple of some small-town street festivals. Cripple Creek, Colorado used to feature this pastime during their big summer bash, as well as an overland pack mule race.
Sounds like good fun. I've really been enjoying the updates from New Orleans, albeit with a bit of jealousy.

Oh, I figgered the chicken drop couldn't be restricted to New Orleans: it's just too much fun. Much like the city itself. Stay tuned, Col.—there's more to come!

This is just awesome!

A "bar game" based on a crapping bird... hahahah

It´s the first time i hear about this..