What’s nastier than finding a worm in your apple?
Finding half a worm.
Several friends recommended a breakfast restaurant in San Diego. Two had decidedly suspect tastes in food, but the third was a local home distiller who dabbles in charcuterie and who hadn't steered me wrong before. I dropped by the place this morning. 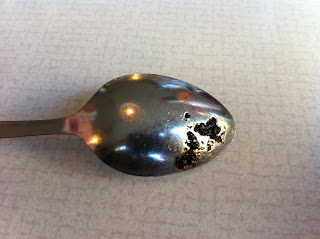 There’s no need to return.

My iced tea came to the table with a long metal spoon already in it. The spoon was encrusted with…something. Melted plastic? Caked excrement? A kelp encrustation? I don’t know. It was vile.

It got me thinking about other nasty food encounters I’ve had and how our food supply can be contaminated by the whim — or policies — of a single individual. There was the kid in my high school who bought fried chicken at lunch, only to find an intact brain from some small animal lurking under the crispy crust. That one seemed like employee sabotage at the fried chicken factory that supplied the school.

Sometimes, though, corruption comes from the top.

Take, for instance, two food wholesalers I knew, both with a moth problem. Each supplied gourmet and specialty foods to restaurants, hotels, caterers, and other food professionals. While visiting the warehouse of the first wholesaler, I noticed workers opening bags of rice, grains, and flour and either sifting the contents or picking through them by hand.

When I asked what they were doing, they explained that warm weather had led to a moth infestation, so — on the owner’s orders — they were removing as much as the visible evidence as possible before repacking and resealing the plastic bags. They were picking out maggots, moth larvae, and whatever waste products they could see. Once resealed, the packages were destined for unsuspecting customers. After all, those exotic grains, flours, rice, and beans were a substantial investment.

The second wholesaler had moths as well, but he carried few grains. Instead, the moths had gone after his dried fruit. His solution? Every single box with any evidence of moth activity went into the Dumpster. Turkish figs, 20 pounds at a time, into the trash. Candied pineapple, entire boxes, thrown out. Enough raisins to make a half-tonne of Waldorf salad. And all the boxes next to the boxes that were infected? They were thrown out, too.

It wasn’t quite Sherman’s march to the sea, but the devastation was impressive. The cost of the rubbishing was obviously painful, but here was a man who was so concerned with his reputation and the quality of his goods that he ordered his employees to rout out ruthlessly anything that could harm his customers and, therefore, him.

I continued to buy from the second wholesaler. The first one? There’s no need to return.

I've eaten — and almost eaten — a lot of nasty things over the years, but the image of those writing pale larvae getting sifted out of food destined for tony restaurants is maybe the one that made the most lasting impression.

So. Nasty food. What's the worst you've encountered?
Posted by Matthew Rowley at 11:21 AM

Recently, some dried mushrooms were discovered in our house with an apparently self-sustaining and thriving ecosystem inside the plastic bag.

Yes, that qualifies as nasty. We had pantry moths that got into (or originaled from) a sealed metal canister of McCann's Irish oatmeal. I was all hungry for hot, steamy Irish oats one chilly morning. Opened the lip, peeled back the seal — and quickly shut my dropped jaw.

Nothing of the sort has *ever* happened to me there.

Among the many things I drink to forget (an incident at the Canadian border, a woman I met at a piano bar, Crystal Pepsi) is the fact that I helped open a restaurant.

The place was filthy before the current owners took it on. Filthy. I have photographic evidence that I refuse to share because I don't want it to reflect on my former employers, who took great pains to make the place sparkle.

The salamander alone could have fomented cyanide-based life, and one of the nastiest jobs I've ever done was scrubbing the walk-in cooler from ceiling to floor.

As appalling as those were, though, they paled next to the disgust I felt at the thought that Jen and I had eaten, several times, at the previous establishment.

Trid ~ no worries. After all, it's not your kitchen. There were a series of mistakes that led to that that tells me the kitchen there is probably one I don't want to visit.

Micheal ~ I was once given the keys to a failed restaurant. The owner told me to take whatever I wanted (except for the new stoves that hadn't even been unwrapped or installed). The bartenders had stripped the bar bare, even taking fixtures. The cooks had been less thorough. I scored a Kitchenaid mixer that I cleaned and gave to a friend, stainless mixing bowls, some Lexan containers — all good things. The real horror was the basement walk-in. With no electricity for weeks, all the seafood, chicken, and meats had gone very, very bad. It was a smell that seared the very back of my throat...

When I was reading this post I could stop thinking about some nasty establishments I visited while living in Paris.

I even worked at some for one or two days when money was really tight.

Millions of roaches everywhere, feasting on the soda gun’s pump room, rat that would scare away any cat (or human) running around the kitchen and all sorts of things.

Of course I also visited some spotless kitchens there too, but the images of the filthy one still haunt me today.

I'm off to breakfast, but the image of millions of roaches feasting on the soda gun will haunt me.

I've been in a lot of commercial kitchens as well and it's the clean ones that stand out. It seems to me that — in my experience — the cleanest kitchens have been run either by Germans or ex-military chefs.

It's perhaps the reason I think to myself when everything is put away in my own kitchen "Alles ist in Ordnung."

I'm just back from 5 weeks in Vietnam, so as for nasty + food: in the northern back of beyond, a basketful of writhing date palm larvae, intended as a source of protein. Also a small skinned fox on the kitchen counter, who seemed to have met his end in a rather vicious way, judging by the fixed snarl. Offered as a possibility for lunch.

I declined. Took the proffered corn moonshine, though.