Cocktail Tomes and Cookbooks in the French Quarter 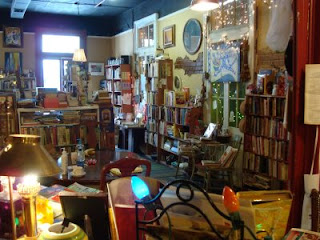 Phillipe LaMancusa has been in the food business for the better part of fifty years. For most of that time, he’s been at the stove, but after Hurricane Katrina (“the storm” locals evoke in casual conversation), he opened Kitchen Witch, a French Quarter emporium of culinary books.

LaMacusa’s opening stock was his own collection of some 5,000 volumes, but these days, he’s just as likely to buy secondhand books from retiring chefs, culinary students, and scouts who bring him vintage and antique treasures. A case of cocktail, spirits, and wine books just inside the front should stop drinks enthusiasts in their tracks, but some digging among the shelves will turn up treasures. Berger Applegate’s 1916 Paul Verlaine: His Absinthe Tinted Dreams is a choice catch for aficionados of the green fairy. 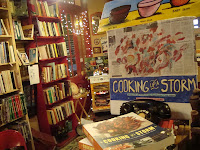 There are also plenty of used (and some new) New Orleans cookbooks, including Mixing New Orleans and Gumbo Tales, Sara Roahen’s slam-dunk investigation into modern New Orleans food and drink. While tourists and collectors make up the bulk of buyers, plenty of locals shop here even still to replace books lost in the storm. Recapturing their readers’ lost recipes has been an ongoing project for food writer Marcelle Bienvenu and Judy Walker, food editor of the New Orleans Times-Picayune. Their book documenting those resurrected recipes, Cooking up a Storm, is featured prominently. Score a copy.