It has been a common saying of physicians in England,
that a cucumber should be well sliced,
and dressed with pepper and vinegar,
and then thrown out, as good for nothing.
~ ascribed to Samuel Johnson in
The Journal of a Tour to the Hebrides with Samuel Johnson, LL.D.
James Boswell (1785)
Small, knobby pickling cucumbers are generally sold unwaxed so that, with little more than a scrub and a trim, they’re ready for the pickle barrel. But who has the space or need for a whole damn barrel of pickles? Not me. 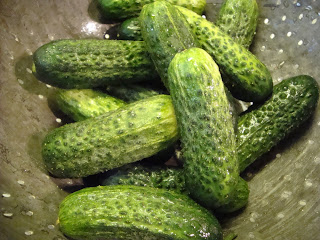 Unlike 19th century Americans or Soviet-era Russians, I don’t put up summer’s bounty to survive harsh winters. I make them because I like the taste. Instead of a big barrel or crock, I tend to make pickles—watermelon, jicama, eggs, carrots, lemons, beets, peppers, whatever looks good at the market—in quart-sized batches. Many can ferment on the kitchen counter and may be ready to eat within just a few days.

Half-sour pickles are one of those counter pickles. It’s worth pointing out that half-sours aren’t half-done or half-ready; they’re cured quickly in low-salt brines. More salt, longer ferment and you’ve got sours. Different recipe. We’ll tackle those some other day. 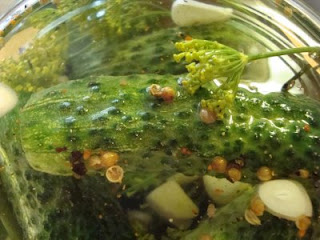 Food writer John Thorne suggests an easy method to combat the air exposure that can cause the pickles to go bad. In his 1984 pamphlet The Dill Crock, Thorne recommends a plastic bag filled with brine to exclude air from a fermenting pickle. If it leaks at all, the brine inside is the same strength as what’s in the container, so the pickle doesn’t get diluted. I use a Ziploc bag to the same effect. 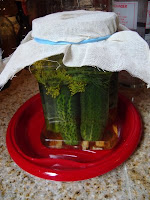 Final note: we trim the blossom ends of the cucumbers. It’s not strictly necessary, but the blossom ends may contain enzymes that could cause the pickles to go all soft and mushy. Not what we’re going for.

Gently scrub the cucumbers under running water to remove dirt and any particularly prominent spines on the nubs. Drain. Trim a thin slice from the blossom end and pack the cukes into a one-quart non-reactive container, such as glass or food-grade plastic.

Stir the salt and water until the salt dissolves. Add the aromatic/seasoning ingredients to the container with the cucumbers. Put the container on a plate to contain any possible dripping once fermentation begins.

Pour in enough brine to cover the cucumbers. Push a sandwich-sized Ziploc bag into the container’s aperture, fill it with the remaining brine, and seal. Cover with cheesecloth and secure it with a rubber band to keep out fruit flies or other flying little beasties you may discover are drawn to this stuff.

After a few days, the brine may begin giving off tiny bubbles. Keep an eye on it and skim off any white foam that rises to the surface, giving the bag a rinse if necessary. The cucumbers will begin turning darker and to taste, well, brined after just two days. Let them go for a week and they should turn olive green throughout. Remove the bag, skim any new foam, close container fast, and put in the fridge. 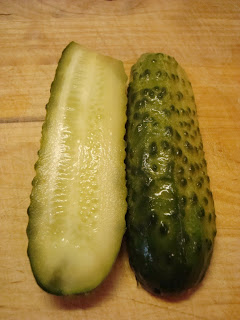 These are meant to be eaten in fairly quick order and are not intended for long storage. Make yourself a sandwich, grill up some burgers, or snack on them Russian style, with shots of vodka.
Posted by Matthew Rowley at 11:26 AM

Could you provide a visual for this? As you can tell ... I am not getting it. :(

lol - wv = expla ... a cross between an explicative and explanation.

Sorry for the confusion. I'm getting ready to hit the road for a few weeks, but I dropped a new thumbnail photo in the post, so let's see if this clarifies:

1) "I place the cucumbers in the container." — yes

2) "I fill the container with the brine." — yes. Well, almost full. You want to leave some headspace to accommodate the plastic bag you'll put *inside* the container.

3) Now, put the brine-and-cucumber container on top a plate (or a pyrex baking dish, or some other non-reactive dish—I used a plastic plate). If the stuff burbles over, it'll save you cleaning the counter.

4) Stuff the bag into the opening of the container with the cukes and brine. Its purpose is to block air from the surface of the cucumbers.

5) Pour additional brine *into* the bag. Squeeze out excess air. Seal it. It should now weigh down the cucumbers under the surface of the brine in the jar, thus sealing out air.

6) Do not put a lid on the jar—leave it off entirely until the pickles are done.

7) Secure a piece of cheesecloth over the mouth of jar.


I don't have any photos of the bag actually in the mouth of the jar, but let me know if this makes sense now.

This makes better sense but in your 2nd explaination in number 5 you say seal it then in number 6 you say don't put a lid on it,but thanks for clearing up what I think some of us were confused about,the recipe sounds great I can't wait to try it.
Thanks

Ahhh...Sorry for the ambiguity. Seal *the bag* is what I meant. So that its contents don't spill out all over the place.

Thanks, Lisa ~ It's Saturday afternoon. I've got the house to myself and a load of small cucumbers in the fridge. I'd been planning an entirely different dish with them, but you just reminded me that this is much easier than what I was planning. Cheers!

Is there a way to can these in a water bath after they have fermented? If not, how long would they last in the fridge?