The recipe had been given to me by an old Quaker lady in America many years ago and I was unsure whether it would go down well in modern Britain, but I decided to do it all the same. I did it exactly as she as written it down in her wonderful hand and the first production, believe me or not, was like eating with God…

~ Maynard Davies
Maynard: Secrets of a Bacon Curer
Even vegans know that bacon is the meat of the moment.

Options for indulging in cured pork belly range from a well-regarded bacon-of-the-month club to bacon-themed wrapping paper and bacon bandages to questionable bacon-scented candles, mints, and car air fresheners. Bacon and chocolate candies may be the vanguard of hip: you may decide for yourself whether they are good.

But when bacon toilet paper is yours for the low, low price of $9.95 per roll, we’ve lost sense that bacon should be delicious. It should be meaty. It should be graced with streakiness and so well cured that it doesn’t shrink and shrivel in the pan, but renders just enough fat to lend a light brown crisp. Ideally, it comes from heritage breeds, raised and slaughtered humanely. But even swine from a feed lot can yield respectable bacon if the curer is a master. 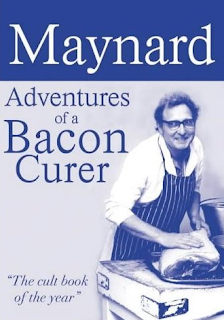 Bacon lovers everywhere rejoice. That master is Maynard Davies. And for the last six years, he’s been telling his story in books. Davies, who retired after selling his Shropshire farm and curing business to Rob and Fiona Cunningham, trained from a young boy as a sausage-maker and curer of bacon and hams in England. His products have been praised by culinary preservationists, Slow Food types, and the British media. That he’s not well-known in the US is just a shame.

But it’s not entirely a mystery. See, Maynard—as he likes to be called—is dyslexic. His books are not polished. They read as if a charming and slightly dotty uncle, prone to aphorism and meandering tales, has sat down to relate highlights from his life and work. Which is exactly what he’s done in Maynard: Adventures of a Bacon Curer and Maynard: Secrets of a Bacon Curer. Maynard’s wife Ann has transcribed his tape recordings and pulled them together into a series of narratives that take Maynard from his earliest days as an apprentice through his stint curing bacon for an American prison to cured meats entrepreneur back in England.

Because of the narrative nature of the books, they aren’t exhaustive treatises on the minutiae of making bacon. They’re a collection of stories by a man who knows his craft inside and out and who cares deeply about making high quality, hand-crafted foods. But as he tells stories about making bacon for gypsies, about building a smokehouse, about raising livestock, or preparing a feast for his daughter’s wedding, a careful reader will glean valuable information about how to use equipment, how to wrangle smoke and fire, how and where to build a smokehouse, which parts of a pig are best for what recipes, and—regrettably—the scams bedeviling gullible country farmers.

His recipes are often unclear and beg questions, but if you know the least bit about curing meats, answers readily suggest themselves. Take, for instance, his presentation for dry salting according to one of his early mentors:

Put currants, raisins and all spices in a container and boil until cooked and dissolved.

Strain into a clean container, cool and then add to brine. 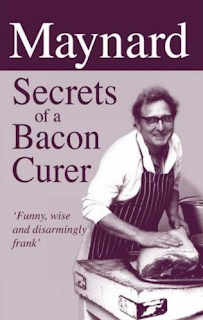 Wait, which water? The 40 gallons? Or a smaller measure? The dry cure goes on after a brining and draining, but you need to read the paragraphs around the recipe box to figure that out as well as how much to use. Because Mayard seems to know so much about bacon, I suspect that he may not have recognized the gaps in directions that leap out at those of us who haven’t spent our lives working salt and seasoning into pigs.

But don’t let that stop you: Maynard speaks with the voice of an artisan. The read is charming, informative, and easy. The information is there, just not in the format to which cookbook readers may be accustomed. Maynard’s aren’t the best recipe manuals among my sausage and meat books. But they are the most endearing I own.

I've been obsessing lately over such things as curing my own bacon and *maybe* attempting something akin to Serrano ham.
Thank you for that douse of gasoline on the fire...SWMBO will thank you (and Maynard).