Review: In Praise of Poteen

Throughout the book
I have spelt the word ‘poitín.’
This is the correct Irish spelling;
the reason for the emasculated
‘poteen’ on the cover
is my publisher’s idea.

~ John McGuffin
In Praise of Poteen
During the Troubles (Na Trioblóidí), those tragic years not so long ago when Ireland nearly tore itself apart in armed conflict, Irishman John McGuffin penned a lighthearted tribute to that most Irish of spirits, whiskey poitín. In light of the armed and bloody conflict going on, McGuffin’s sly humor comes across as almost subversive in its ability to appeal to audiences on either end of the conflict as he weaves together anecdotes about illicit distilling. 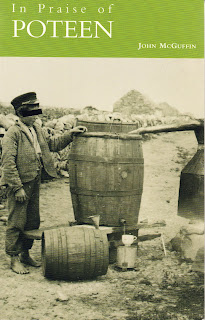 Among Americans, even American distillers, a popular notion holds sway that the illicitly-made poitín is nothing more complex than fermented and distilled potatoes, which Ireland has in great abundance. No doubt, it can be, and has been—I’ve met Irish distillers who related convincing methods for wresting liquor from spuds—but potatoes are not the easiest thing to convert to spirits, and authentic poitín has been made of barley, oats, and other grains for centuries before taters put down rootlets in Irish soil. Barley recipes are particularly venerable. But a lack of grains doesn’t mean it’s not the real McCoy. As with American moonshine, now very old recipes call for sugar, either granulated or as treacle.

McGuffin knows this all too well. In fact, in one “grain bill” he gives us:

“When properly made,” he assured us in 1978, “it doesn’t taste too bad.” Looks like there was at least a gallon of the stuff to go around once all was said and done. As anyone who has made a custom of sampling clandestine liquor since then can tell you, McGuffin admits that some poitín is rubbish, while other examples clearly outshine “parliament” (that is, tax-paid) whiskey.

I had heard while traveling in Ireland that the Troubles were hard on the moonshine trade. McGuffin elaborates. Distributors hauling illicit whiskey in carts, wagons, and—later—cars and trucks have always used subterfuge to slip the product past guards, into towns, in markets, and even courthouses. The Troubles and the violence they entailed changed the way that the Gardaí (the police) looked at suspicious vehicles and behavior. Routine search-and-seizure gambits gave way to more serious investigations into suspicious activities. Autos and lorries on the roads were more likely to be searched, especially near the border with Northern Ireland, since the contraband might just as easily be arms and explosives as a drop of home-distilled whiskey. Hauling a load of empty bottles? Who’s to say they are not for Molotov cocktails rather than homemade liquor? Across the border, local constabulary and the British Army were also on the hunt as vehicles were examined with dogs and mirrors on poles. Under such scrutiny, many haulers decided the time was right to get out of the business.

If it’s straight-up recipes and detailed how-to you’re wanting, this isn’t the book. The few recipes included serve as embellishments to stories about Irish whiskey, its illegal production, its history, and the cat-and-mouse games of diversion and detection between distillers and Gardaí who pursued them. Overall, his rueful tale is one of a craft in retreat except in remote areas long known for an appreciation for “the cratur.” Given the importance of Irish folk distilling in shaping the tenor, methods, and even vocabulary of American moonshiners, however, it’s an important read for understanding the parallel rise of folk distilling on these shores.

Buy it: Appletree Press released a new printing in 2002 that is available from Amazon and Amazon UK. Or, if you're in Dublin, drop by the massive Hodges Figgis (56-58 Dawson Street, Dublin 2) and score a copy.