Do it to Julia! Pink Cloves and Gin at the Chestnut Tree Café

Turns out that pink clove cordial is common enough in the UK where J.R. Phillips makes — among its several cordials — a 5.3% abv clove version. Of this one, cocktailingredients.co.uk writes it is “…still one of Devon's most popular imbibes. Pink Cloves adds a rosy hue and great flavour to punches, gin or vodka.” Seems most British online shops sell it for around £8/700ml.

I admit a certain degree of interest in the stuff, though — honest to god — a little clove goes a long way.

Scott’s question sprang to mind recently because I’ve been pecking at a first British edition George Orwell’s Nineteen Eighty-Four on and off for a few weeks. Because I like to attack a topic from a few angles, I also watched the 1984 film adaptation with friends. At the end of the novel, Heim’s gin and cloves show up as the habitual drink of protagonist Winston Smith. It’s a taste that’s been knocking around, it seems, since at least the middle of the last  century. 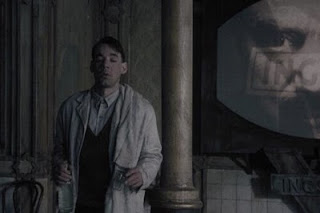 After Smith’s brutal torture in the bowels of the Ministry of Love, he settles in at the shabby Chestnut Tree Café, where broken traitors and thoughtcriminals go to eke out their days. In the film the café’s grubby and disinterested waiter delivers room temperature government-issue gin — and three dashes from a bottle. I expected the little dasher to be bitters at first, but the book reveals it’s “saccharine flavoured with cloves.”

In that dark and drab 1984 film version of the story, John Hurt plays Smith and Richard Burton plays his nemesis and savior O’Brien. It’s a harrowing view of humanity. You may or may not care for the Eurythmics musical score. But after reading the entire novel, Orwell’s original description of Smith in the café is chilling:


The Chestnut Tree was almost empty. A ray of sunlight slanting through a window fell on dusty table-tops. It was the lonely hour of fifteen. A tinny music trickled from the telescreens.

Winston sat in his usual corner, gazing into an empty glass. Now and again he glanced up at a vast face which eyed him from the opposite wall. BIG BROTHER IS WATCHING YOU, the caption said. Unbidden, a waiter came and filled his glass up with Victory Gin, shaking into it a few drops from another bottle with a quill through the cork. It was saccharine flavoured with cloves, the speciality of the cafe.

By dragging Orwell into it, I don’t mean to suggest that Phillips’ pink clove cordial is anything less than good and wholesome. The serendipitous connection between Heim and Orwell — two writers I admire — amused me, is all. In fact, I hope to get my hands on several varieties of Phillips cordials one of these days for experimentation…and studiously to avoid any place even resembling the Chestnut Tree.

That's so funny: as soon as I saw the original "Chestnut Tree" verses I thought of "1984" and the clove-spiked gin.

"Under the spreading chestnut tree,
I sold you and you sold me."

That line stuck with me, too, Michael. Had to hunt down the original (of which there are many variants and alternate lines, so the concept of an "original" is suspect in the first place), but mocking verses apparently were popular during WWII.

Now I suspect that chestnuts and cloves will forever regrettably be linked in my mind.