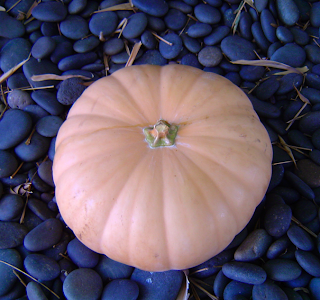 With the notable exception of succulent, succulent swine, pumpkin is just about my favorite thing to eat in the Autumn. Snuggle those up together and you’re onto some serious good eats.

Consider pork & pumpkin posole with a dollop of crema and a scattering of minced raw onion and cilantro; or, for tacos or burritos, shredded pork shoulder in a puckery tomatillo/chipotle sauce with chunks pumpkin flesh; what’s not to like about creamy pumpkin soup studded with pork meatballs, laced with smoked paprika, and spiked a with a dash of sherry vinegar?—these are the things that get my motor revving on brisk fall days.

Not, of course, that it gets terribly brisk in San Diego, except in the few hours before dawn. But the winds this time of year are enough to make me crank the oven and churn out a succession of stocks, stews, soups, and other savory hot dishes.

Last night we grilled some pork tenderloins (the usual method, with a simple marinade of garlic, black pepper, salt, lemon juice, and oil) and dropped down a side of pumpkin, the second time plying pork and pumpkin in as many nights. 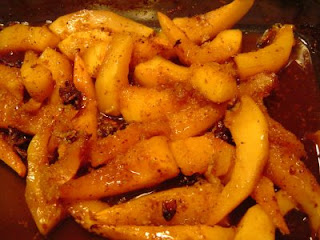 The seasoning for the squash is one I use a lot for flanken-cut pork ribs, but it worked pretty damn well with a firm-fleshed pumpkin. I snagged a flat, ribbed French variety at our neighborhood farmers’ market, but any sugar or “pie” pumpkin will do, just avoid those big jack-o-lantern jobs as they are too stringy and watery for eating.

Preheat the oven to 350°F. Peel the pumpkin and use a spoon to scrape out the inner fibers and seeds. Set aside that sloppy mess if you feel like toasting the seeds later. Cut the pumpkin into thumb-sized slices.

In a 9”x13” Pyrex baking dish, combine the remaining ingredients. Toss with the pumpkin slices. Bake about 40 minutes, or until the pumpkin is tender, giving it a gentle stir now and then to turn the pieces over and distribute the syrup. Serve hot. With pork, natch. Or, if you’re not down with swine, rice.

Also, since Morpheus is on the road for a week as of 5am today, Chez Rowley is now officially a bachelor pad and I'm indulging in swank bachelor grub (i.e., leftovers eaten over the sink). First up was breakfast this morning: cold grilled tenderloin, sliced on the bias and topped with a bit of cooked half-slab pumpkin. I call it Bachelor's Brushchetta. It might just be lunch, too, if I fish out some bitterballen from the freezer. 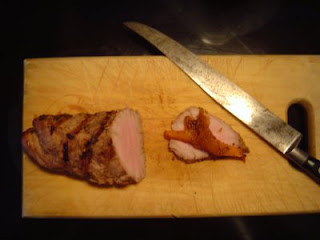 Posted by Matthew Rowley at 1:51 PM