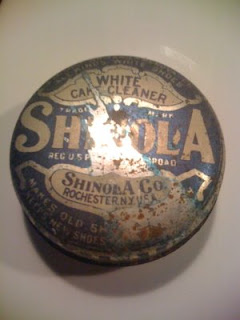 A few weeks back, I mentioned that, unlike other cocktail enthusiasts, I declined to contaminate my finest bourbons with bacon.

Odd, right? I mean, I dote on bacon. In fact, tonight's dinner will be BLT sandwiches since the local tomatoes are still good. Hell, I've even cured my own bacon. And bourbon? Don't get me started. It ain't just patriotism that keeps me stocked up with a robust inventory of that most American of commercial spirits. You'd think the two would go together like a hand and glove.

On seeing Don Lee's video of making a Benton's old fashioned, Morpheus said "Man, that sounds delicious." So, in a moment of weakness, and in the spirit of experimentation and camraderie, I snagged a bottle of Four Roses yellow label Straight Bourbon and cooked off a batch of some of Allan Benton's sublime bacon. Following Lee's instructions, I made a batch of bacon-infused bourbon.

I feel like I've woken in a stranger's bed, one arm pinned beneath a smokey, booze-breathed hound sawing logs, and uncertain of how to extricate myself. Brother, I'm here to tell you, don't believe the hype of bacon-infused bourbon. The saddest part of this errant tale is that a perfectly good bottle of bourbon was ruined.

I admit that I liked the second sip more than the first. But as a thumbnail sketch of a choice between two evils, sip #1 and sip #2 do just fine.
However, all is not lost...the entire bottle of Four Roses was not graced with the porcine kiss: I decanted about six ounces before introducing the bacon fat. Had some straight, some over ice, some with a splash of water, and some, gloriously, in a proper old fashioned. For those who know 4R as a low-end bargain brand, the spirit seems to have undergone an upgrade in the last few years.

Now, it's true that I keep a lot of bourbon around. But 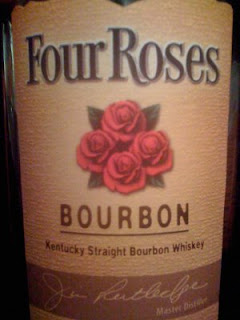 there's always one or two bottles of what I consider the current "house" bourbon that balance drinkability and price for overall value. Over the years that's been Maker's Mark, Bulleit, and Eagle Rare. Four Roses, you have earned the place of honor. What a delicious whiskey. And at $19.99, it's worth snagging a bottle for cocktail experimentation.
Just keep it away from the swine.

The cheapest I've seen this whiskey is Hi-Times Wine Cellar.
.

Posted by Matthew Rowley at 5:22 PM

I was never quite sure what to make of this craze for bacon bourbon - it definitely seems a peculiarly American thing to do.

After trying a Benton's Old Fashioned at PDT a few months back, I'm still not really sure. The smokiness was interesting, but for me it just didn't seem to work very nicely.

"Craze" is a fitting word, Jay. I'll chalk this one up as an historical curiosity. "Remember MC Hammer pants?" we'll ask one day. "I'll see your Hammer pants and raise you jackets festooned with zippers."

"Ah, yes," we'll counter, "Those were regrettable times. But what about that smoked bourbon that Americans used to drink?"

"Smoked bourbon? What was the matter? Did they have crappy whiskey to start? I mean, was it like Prohibition when folks had to disguise the raw taste of bad alcohol with all sorts of mixers and flavorings just to choke it down?"

"No, the bourbon was good. It just seemed new and cool, an offshoot of molecular mixology which made the entire field of bartending seem like an endless vista of possibilities for new taste and sensation combinations heretofore unknown to the drinking class."

"Wow. Sounds fancy. Was it all bullshit?"

"Nah. Some of it was pretty cool and stayed with us. I mean, Hammer pants were laughable, but we still wear pants, right? Bourbon is still good; bartenders came to their senses and realized that the Scots had been applying smoke to their drinks more skillfully for centuries."

"A shame no one ever figured out how to get a real taste of bacon instead of just smoke into the drink. Now that might have been worth sampling."

I tried this with some bottle heels and about twice as much Niman Ranch Bacon fat/whiskey as they use for the Benton's. Niman's bacon is fairly lightly smoked so, maybe got a bit more of the pork flavor into the resulting whiskey than just smoke.

Can't say it was all that appealing. Ended up dumping the results.

Poured it down the drain? Oh, I'm so sorry, Erik. I did the same with the cocktail.

There is something tantalizing about the admixture of bacon and whiskey, though, and my hat's off to those who have tried to bring them together harmoniously. Perhaps a touch of bourbon is what's needed for bacon, rather than the other way around...

In the meanwhile, I'm headed to Florida for a few weeks and I'm promised that the bottle will be consumed in my absence, so it's not a total wash.

Jay Erisman wrote an excellent article about the rebirth of 4R in Malt Advocate a couple of issues ago. Regarding your pantry, note that until recently, Bulleit was made by the 4R distillery.
4R is great bourbon, the Single Barrel is even better, and none of it deserves to be fat-washed. Although, really, fat-washing does _sound_ awesome, doesn't it?

Are you kidding? Fat washing sounds like one of the most awesome things ever. Chapters I-III of the Star Wars saga sounded like a great idea, too, though, and look what that brought us. Next up? Schmaltz-washed gin.

Thanks for the MA tip-off, Max. Will look into it.