Donner? Party of 12?
Your table is ready.
As the Smiths song has it, meat is murder. According to a recent verdict in a British court case from Yorkshire, it is apparently delicious, cannibalistic murder. It seems that a former Mr. Gay UK had been convicted on charges of murder, and of cooking and eating at least a portion of another man. One can't be too careful about those offers to come for dinner.

I do my part to keep human flesh consumption to a minimum. Even so, we don’t eat as much meat as I did growing up in Kansas City—where any meal without a bit of flesh seemed like we got stiffed—but we are far from vegan.

Since moving to California, one of the area’s dishes I’ve come to appreciate is Santa Maria barbecue. This variety from the central coast between Los Angeles and San Francisco uses tri-tip, a vaguely triangular piece of beef cut of beef that is infrequently found in the US beyond the state's borders. Cooked Santa Maria style, tri-tip is bathed in a marinade of salt, pepper, garlic, and occasionally other spices, and then slowly grilled over red oak. 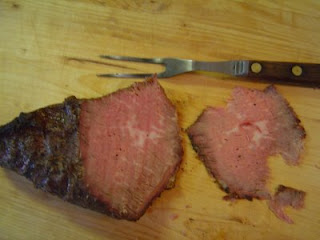 Now, because it’s grilled and not smoked slowly for hours, it’s not barbecue as we understand it when we eat in places such as Kansas City, Memphis, Texas, or nearly anywhere in the Carolinas. California is far enough away from those other places, though, that those living there shouldn’t get their backs up about it.

The seasoning I use when grilling tri-tips is your standard Santa Maria spice mixture, except that because lemon trees are so common here, I include dried, powdered lemon peel that I make myself once a year when concocting my annual batch of fish house punch (that calls for a quart of fresh, strained lemon juice).

If you don’t have tri-tip, you’re not out of luck. It turns out that the seasoning works very well with flank steaks, tenderloins, and other beef cuts as well as pork cuts you would normally grill.

As for manflesh? I shall leave that and its preparation to your discretion. As with moonshine and home-distilled liquor, it is prudent to obey local laws.

For this, I used a mild canola oil because an assertive olive oil taste would throw off the flavors of some great beef, but do as you will. The beef itself should not come very fatty, but trim off any huge hunks of fat, leaving enough to help the marinade along as it slowly cooks over the coals.

Put the ingredients (except the beef) in a food processor or blender and blend until the mixture is emulsified and fairly smooth. It is not necessary to make a completely smooth and homogenous mixture. Smear the mixture all over the tri-tip. Place the meat in a zip lock bag or a nonreactive bowl and let marinate in the refrigerator for several hours or overnight.

About an hour before grilling, let the meat come 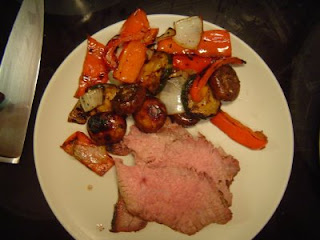 Sear the fatty side over direct heat, then the other side, about 3-4 minutes per side.

Cook over indirect heat about 20-25 minutes (it’s to an internal temperature of 120-25 Fahrenheit). Let the tri-tip rest 10 minutes and slice thinly against the grain.

Note that the traditional accompaniment to this is a small dish of the small ruddy pinquito beans one finds up the coast. I'm lucky since I can get them at our local farmers market. But they can be tricky to find outside California. As you can see in the photograph here, sometimes I just throw some vegetables on the grill for the last several minutes of cooking.

Posted by Matthew Rowley at 5:26 PM

However, I would suggest that, as it's typically cooked in the Central Coast, Santa Maria Barbecue is actually slow-cooked over smoke. Typically the pieces of meat, say, 1-2" thick, are cooked on the grill which is hoisted, say, 3-5 feet above an enormous bin of coastal (typically red) oak.

The oak is first burned for an hour or so, so that by the time the meat is place on the grill, it's a bed of smoky embers. Then, with the meat, a few pieces of fresh oak can be thrown on to get more smoke. Because the heat source is so big, and the meat is so far away, the effect is similar to cooking in an enclosed space -- the temperature on top of the meat is basically the same as on the bottom, and the smoke is consistent if not super thick.

I believe this method started with the Spanish in the area, and of course the smoke has the effect of breaking down the toughness of slow-cook cuts of beef which has eaten only grass.

If you ever want to borrow a Santa Maria BBQ trailer and do it at the (more traditional) festival scale , let me know. IMO it makes for a different essence of the meat than a backyard scale does. Plus, I have a store of pinquito beans.

I will defer all questions of Santa Maria style barbecue on a large scale to you. In fact, you're dead-on correct about the larger scale cooking methods. By the way, when are you planning to have your next barbecue throw-down? I'll be there with a bib and a fork.

The result of writing when I'm beat and posting without sleeping on the copy is that sometimes my words are not as clear as they should be. The amount of ingredients I mentioned here are strictly a scaled-down, small-family, at-home version of Santa Maria Q. In fact, the rigs and set-ups that you find in regional fairs and festivals are indeed be bed-of-embers you describe. However, I have had so-called Santa Maria BBQ in restaurants known for it and been so disappointed with what were essentially steaks grilled over wood. Not that they weren't good, just that they had little of smoke's benefits other than a wisp of flavor. I wanted to do something a little better with this recipe, though it's hard to beat a full-on pit for genuine barbecue, regardless of its origin.

I'm not sure—though I deeply appreciate the offer—that I have a legitimate use for a full barbecue trailer. Perhaps the next time you are contemplating putting it on the road, give me a call and I'll help you man the thing. We can talk beef, whiskey, and the proper ways to do both. Now, if you've got an old smoker around gathering dust...

I totally agree - good small-scale interpretations of the big-style SMBBQ are dear. I also tend to agree about restaurants in the SM tradition -- in fact I think the cuisine doesn't really lend itself well to single servings, so creative interpretations such as you suggest are probably the better way to go.

I don't really have an excuse to break out the grill either, I was trying to tempt you into providing one! We'll have to think of something.

That sounds good I like alot of those ingredients on my meat too. If you want more recipes or if you want to take a look at the collection of tips I have for grilling you can visit www.cookingandgrillinoutdoors.com

Maybe what we need to do is to initiate an oral history program about California foodways with the imprimatur of a well-respected organization or university.

I can picture it now. The first installment would be interviews with a dozen or so accomplished central coast pit masters. Naturally, there would have to be some road trips involved and lots of on-site sampling. In addition to the pit masters, such an endeavor should include ranchers and farmers raising the cattle used in the best SMBBQ.

Maybe then, we can break out that barbecue trailer.

I'm sorry that you've been human meat-deprive; that's where I get most of my protein. ;)

Doug! Either you don't eat much protein or you're possibly a most dangerous man to know. Good to see you drop by ;)