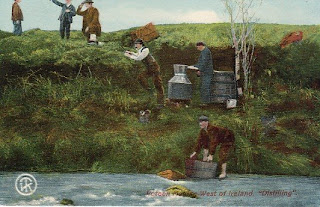 My family is not a whiskey making family, but we are, in large measure, Irish; that is, we are a whiskey drinking family.

After years of tracking down modern American home distillers and old-school moonshiners, I jumped at an unexpected opportunity not long ago to visit Ireland and look into poitíners, transatlantic cousins to our own whiskey-makers.

Making poitín, as homemade whiskey is known in Ireland, is a dead or, at least, a dying craft. Everyone I spoke to about moonshine in Belfast and Dublin confirmed it. Eccentric old men, they allowed, may tend dubious and antiquated mountain stills, but nobody actually drinks the stuff.

Then I went out west.

Within four hours of arriving in Sligo on the island’s western fringe, I had been offered local whiskey by my cab driver, two men in the first pub, a musician in the second, and the owner of the third. By night’s end, two men who initially maintained they knew nothing of poitín shared recipes and revealed a suspiciously savvy knowledge of distilling techniques. In western Ireland, it seemed, you couldn’t swing a dead cat without knocking over a bottle of white mule.

Just as with moonshine, misunderstanding, hearsay, and outright lies regularly obscure truths that a simple round or two of fieldwork would reveal. Much of passes for hard facts is absolute twaddle passed on from one gullible non-distiller to another, neither of them able to tease fact from folklore or just storytelling embellishments. Take, for instance, this from the BBC:


'Oh, my God I Think my Throat is on Fir...' These were the last words of a foolish man after drinking a small tot of poitín. If you ever drink it, which you should not, do not drink more than a thimble full. After drinking a lot of poitín, it is possible to pass out and stay passed out for a few days. Those that do this will have a frightful headache and should not drink anything in the morning, as that will just get them drunk again without doing anything for the headache.

Drivel. Of course you should drink homemade liquor if you trust the source, though, as with any strong alcohol, moderation is key to staying vertical (and, let’s face it, sources are not always to be trusted). But home-distilled spirits are not some magical potions that induce comas. Refusing a drop of whiskey would have been rude. Missing that drop would have been a shame: as clear as water, smooth, with polished notes of barley, the work of an artisan.

If, in your travels, profession, or avocation, you should come across homemade spirits, do try some. Be aware that not all of it is good, but some examples are near nirvana.

Poitín, which refers to the "little pot" in which clandestine spirits may be made in Ireland, is an Irish word pronounced roughly "put-cheen." In English, you are apt to find it spelled potcheen or poteen (though feisty Irishmen have referred to such spellings as "emasculated"). Commercial examples do exist—though, being made and sold openly, they could hardly be called the real McCoy, whatever merits they might otherwise possess.