A Smooth and Creamy Pâté

My introduction to Nigel Slater’s writing was at Kitchen Arts & Letters, Nach Waxman’s cookbook store in New York. Its manager, Matt Sartwell, understood my tastes and my interest in titles from Europe, Latin America, and Asia. He also understood that I was willing to pay more for such imported books because they were often more interesting than so many of the latest American offerings. Or, at least, the titles in that particular store were. 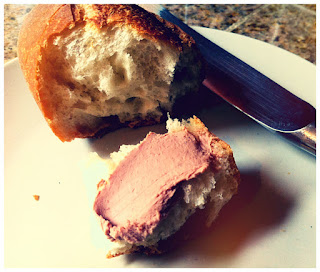 Once, nearly ten years ago, I was browsing the shelves and making a small pile of books to take home when Sartwell asked me if I’d heard of Slater. The name was only vaguely familiar. British was all I could come up with, perhaps a columnist. “His earlier books weren’t anything special,” I recall him explaining as he took a book from the shelf “But his latest one” — and here he pulled an old clerks' trick by placing it in my hand — “is quite good. He writes like you talk.”

I wasn’t at all convinced that anything resembling more of me was something the world needed.

But I humored Sartwell and flipped through the book. The more I plucked through its pages, the more I realized that this guy did write a lot like I speak. Not entirely. Maybe a bit more floral and breezy than I might be. His ingredients, tastes, and methods of cooking, though, as well as a casual style that puts less emphasis on exactitude than on appropriateness, was uncannily similar to my own. He wrote of “enough” butter, glugs of brandy, and splashes of wine. Commonsense in a way that made me appreciate just how uncommon sense truly is. 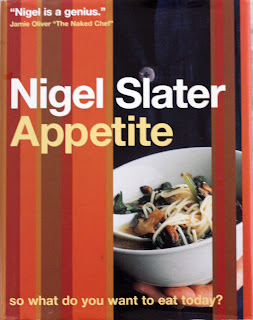 I added the book to the pile. Some books in my library I don’t open for years on end. Not a month goes by, though, that I don’t crack open Slater’s Appetite for inspiration. Still on my Braunschweiger high, I was craving a bit of liver sausage. For wont of a proper smoker here at the house, though, braunschweiger was out. Chicken liver it was, then.

The milk was whole, the brandy from Jepson (which I wrote about here), and the schmear photo is mine. The rest of this is all Slater (sounding freakishly like me):

A Smooth and Creamy Pâté

There is a constantly recurring lunch in my house that consists of little more than deli shopping laid out on the kitchen table, eaten from its wrappers and cartons. It is a Saturday morning thing, really. Hunks of bread, either freshly baked sourdough or a crisp ficelle, some tiny, purple-black olives, miniature gherkins, a knobbly salami, and a couple of fat wedges of cheese are pretty much what we seem to have. Yet it is a favorite meal, one I enjoy as much as any other, I like a pear with mine, too, or a huge bunch of sweet, muscaty grapes. The star of such a meal is often a white china dish of homemade pâté to go with the little gherkins, or cornichons as they seem to be called nowadays. It is so difficult—almost impossible—to find a commercial pâté that is both velvety and pink enough that I think it worth making your own. The method that follows may sound pedantic, but it is small points such as the sieving after the initial blending that make the difference between a good pâté and one that is truly sublime. Some swamp-green canned peppercorns, hot, soft, and addictive, to scatter on as you eat will bring untold rewards.

Trim any dark or green bits from the livers, cover them in milk, and leave them for thirty minutes. This will rid them of any bitterness. Soften two-thirds of the ½ cup butter, not so far as to melt it, but just so it takes a finger easily. Melt the remaining third in a shallow pan. When it starts to foam, drop in the livers, drained of their milk [and blotted dry on paper towels]. Take care—they will spit at you. Let them develop a pale, golden crust on one side, then turn them over and do the same to the other. It is essential that the butter is hot enough for this to take only a few minutes, otherwise, the center will not stay pink and the pâté will lose its magic.

Now tip the livers, their butter, the softened butter, and a generous seasoning of salt and black pepper into a blender or food processor with the cream, and blitz to a smooth puree. Pour a couple of good glugs of brandy into the empty pan, put it over the heat, and bring to a boil so the alcohol burns off (some people ignite it at this point, but I have never found it makes that much difference). Pour the brandy into the creamed chicken livers and continue to blitz. No matter how much you whiz the pate there will still be some graininess, but it should remain pink.

Now, using a rubber spatula, push the mixture through a stainless steel sieve into a bowl. I know this is deeply boring, and the sieve is yet another thing to wash up, but it really does make a crucial difference to the pâté, turning the grainy and the mundane into the blissfully velvety. The point is to have as smooth a texture as possible, and you can only get that by sieving. Scrape the whole lot into a terrine or bowl, smooth the top, and put it in the fridge to set.

Half an hour later, and no longer because the mixture will discolor, melt the ¼ cup of butter and scrape off the froth that rises to the surface. Pour the butter over the pate and return it to the fridge to set. I tend to leave mine for most of the day or overnight, but it should be ready in three or four hours. It will keep for a day or two.

Details for the American edition:

It was so good to see you the other day that I read this whole article with pleasure (I am a vegetarian, for those who know. So i usually gloss over the 'meatier' subjects.). It is uncanny the similarity in prose / vernacular (though you were correct in the 'breezier' assessment, perhaps that is from some entitlement, apathy or just plain indifference, but none the less quite similar.). Also your Jepson assessment is dead on.. i have not found the $19.99 wonder deal, but that brandy is still fantastic.

And so good to see you, sir. That was the first day I'd ventured out of our little neighborhood since July and an impromptu road trip to Costa Mesa, even in driving rain, was exactly the thing I needed to shake off this cabin fever. No doubt, we'll do this again before the holidays settle on us. Cheers!

Oh, and the Jepson? If I ever find it again at that price, I'm just buying out the stock. I'm far more likely to go bad before the brandy does.