Hiram Walker makes a gingerbread liqueur, biscotti-flavored cordial is not unheard of, and in his The Joy of Mixology Gaz Regan gives a recipe for a Jägermeister-spiked Oatmeal Cookie cocktail. Americans, though, simply don’t make cookie-flavored cocktails and cordials at home. Not often, anyway. 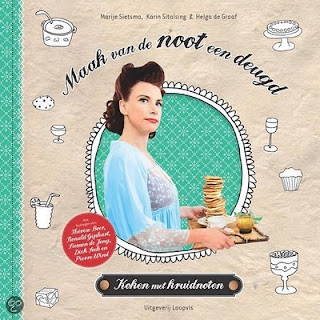 Fitting then, that the Dutch — who, after all, ran the first commercial still in America in the 17th century and gave us our word cookie — have a recipe combining the two. In a post last month, Lizet Kruyff relates a recipe for kruidnotenlikeur from Maak van de noot een deugd (roughly “Make a virtue out of nothing”), a new Dutch cookbook devoted entirely to cooking with kruidnoten.

Kruidnoten are tiny gingerbread cookies, cousins to the Christmastime specialty peppernuts. A direct translation is "spice nuts" but "nuts" refers to their diminutive size; they are no more likely to contain nuts than are peppernuts (or doughnuts, for that matter). Typical spices in the little cookies include ginger, cinnamon, nutmeg, cardamom, white pepper, cloves, and coriander, but such things vary with the baker.

With the help of Renée de Vries, an internet specialist at the University of Amsterdam, I tracked down online excerpts from the book. Why? Well, because Kruyff’s blog calls for 12 liters of genever, a Dutch spirit enjoying a modest renaissance in the US. Even counting my personal stash of current and vintage bottlings, there are probably not 12 liters of the stuff in our entire neighborhood. Plus only 500 grams of sugar to make a cordial with that much liquor? Something is not right. A look at the original reveals that her "12" liters is actually "1/2" liter. Big difference.

My somewhat loose and streamlined translation follows. For sticklers, see the original recipe below. Kruyff suggests both using white rum as an optional base spirit and, if you're so inclined, adding a splash of cream after the maceration. The original recipe notes that you can use cane sugar for a "warmer" taste and darker color.

Push the kruidnoten through the bottle's opening. Put the bottle away for about six weeks in a dark closet. Give the bottle a shake now and then to show it who's boss and so that the flavors can blend. Do not worry if it looks nasty.

After six or seven weeks, strain through cheesecloth or a clean tea towel into another bottle. Do this again if you doubt whether particles remain.

Make the syrup. Put the sugar and water in a saucepan with a thick bottom. Bring to the boil, stirring. Stir until all sugar is dissolved. Let cool, mix with the kruidnoten infusion and pour into a pretty bottle. 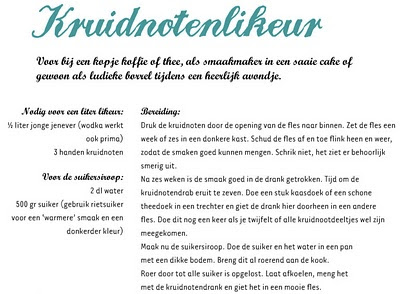 Posted by Matthew Rowley at 8:11 AM