Somewhere in storage, I've still got an armload of Charles Bukowski books, most of them autographed. Over the years, I've given some away as gifts. Others just languish in the dark. I thought at one time that if I ever had trouble paying rent, I could pawn them off on Hank Chinaski enthusiasts for some extra scratch. Held onto some very old Lovecraft books and autographed Burroughs, too, for the same reason. 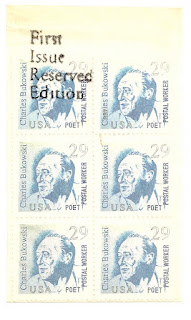 There was a time when I was enamored of his writing. Jaw-dropping amounts of booze, gambling, and desperation. Loose women and soul-draining work. During long, snowbound Midwestern winters, the Southern California he described, even with its bums, drunks, adulterers, addicts, and assorted losers, held an almost aching grip on my imagination.

Here's the deal about Bukowski, though: once you've read ten of his stories (any ten: pick 'em), you've pretty much read his entire oeuvre. Despite his sometimes mesmerizing use of English, there's only so much I can read about an alcoholic's inside take on bleeding ulcers, distended livers, and drunk-tank vomit before I wonder...what else have you got?

So I stopped buying Bukowski books. Stopped reading the ones I own. I still got a smile today, though, when I was digging through old papers and found my long-lost Bukowski stamps.

These aren't supposed to exist. 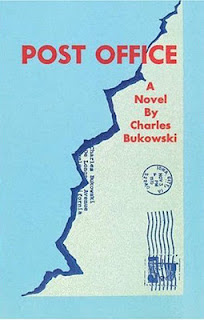 Bukowski spent nearly 15 years working for the US Postal Service. His novel Post Office is an autobiographical take on those awful years and remains perhaps his best-known work. Although one hears occasional rumblings about the possibility of an official USPS Bukowski stamp, that hasn't happened. These stamps are a bit of subversive art I picked up in New York back in the 1990's and made to look like actual postage stamps, complete with a little Glassine sleeve. They are an homage to America's most famous real-life postal worker, if not our most celebrated alcoholic.

Posted by Matthew Rowley at 6:28 PM

check out The Third Policeman for the best pseudobiblia
Flann O'Brien's best work.

Douglass ~ Thanks for the heads up. I've heard of it, but never cracked open a copy. Something to track down. Cheers,
rowley