Not long ago, I made a huge batch of boiled shrimp for the boys — more than could be downed in one sitting. I was a little taken aback that anything was left at all, but, to be fair, the pot had been brimming with not merely shrimp, but cobs of corn, fat links of smoked sausage, garlic heads, and more, all seasoned with a satchel of South Louisiana spices. 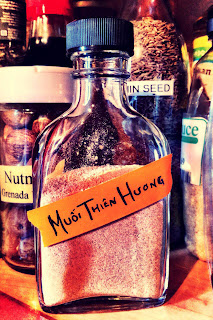 Leftover shrimp aren't exactly a curse, but they were already cooked, so they wouldn’t work in gumbo the way I make it. I was thinking of a simple salt-and-pepper treatment I’d done on shrimp last year when Luke Nguyen sprung to mind. For the last several weeks, I’d been reading the recipes of this Vietnamese-Australian cook, author, and culinary explorer; his muoi thien huong (salt-and-pepper seasoning) seemed a perfect fit.

Within five minutes, I’d cranked out a batch of Nguyen’s simple seasoning laced with ginger and five-spice powder, sliced two limes, dumped a handful of cold cooked shrimp on a plate, and started dipping.

I ate alone. There would be no leftovers this time. Nobody saw my smiles.

From Secrets of the Red Lantern (in which it's also deployed with shrimp), here’s Nguyen’s

Mix thoroughly and store in an airtight container

Afterwards, in the wake of my speedboat gluttony, I realized the rice noodles in the cabinet would’ve made a nice complement, maybe with a splash of fish sauce and fresh mint.

Ah well. There will be extra shrimp next time, too.

Posted by Matthew Rowley at 8:53 AM