She was rather like one of those innocent-tasting American drinks which creep imperceptibly into your system so that, before you know what you're doing, you're starting out to reform the world by force if necessary and pausing on your way to tell the large man in the corner that, if he looks at you like that, you will knock his head off.
P.G. Wodehouse (1919)
My Man Jeeves
With Christmas less than two months off, we’re solidly into cookbook season. This year, that means cocktail books as well. Of those, a handful of new American drinks titles should be on the radar for the cocktail geek in your life (even if that happens to be you). We’ll take a look at some of them over the course of the next week. 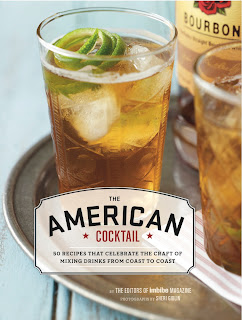 First up is The American Cocktail by the editors of Imbibe magazine. Imbibe writing is spirits-heavy, but covers drinking broadly, so any given issue may have stories on tea, soda, coffee, wines, beer, cider, or even water. Producing a cocktail book was a natural course for them; I’m glad to see the editors finally got around to it.

Headnotes on fifty recipes in the book give historical context, ingredient notes, and drinks origins. The recipes themselves are from bartenders across the USA and are broken into areas of the country (The South, Northeast, Midwest, West, and West Coast) where regional ingredients from sassafras to huckleberries lend a sense of place to all of them. Without getting to the elaborate preparations of molecular mixology, the book gives a pretty representative look at what drinking looks like in craft cocktail bars around the country. Wisconsin Kringle syrup to liven up your brandy, anyone? What about a persimmon margarita?

An eight-page appendix of American craft distilleries is a particularly welcome addition, as is specifying particular spirits from local distilleries throughout the book. Yeah, yeah, distribution is limited for a lot of the spirits, so you can usually swap out the specific spirit with a similar one you’ve got on hand, but hats off to the bartenders and editors for making the point to call out local liquor in many of the recipes. Hunt around online; you can often find merchants willing to ship local wet goods to your door.

Combine the rum. Campari, lemon juice, and pineapple juice in a cocktail shaker, add ice, and shake vigorously. Strain into an ice-filled Collins glass. Top with the Cheerwine. Stir to combine and garnish with the orange wheel.

The Editors of Imbibe Magazine (2011)
Photos by Sheri Giblin
The American Cocktail: 50 Recipes That Celebrate the Craft of Mixing Drinks from Coast to Coast
144 pages (hardback)
Chronicle Books
ISBN: 081187799X
$19.95
Posted by Matthew Rowley at 2:22 PM

I am so down with Kringle Syrup!

No doubt. Do you have the recipe? I can send it if not...