Last summer, I uncovered a stash of underpriced Zaya Gran Reserva rum in a coastal mom and pop liquor store. I rolled away with a single drink in mind and half the stock in my trunk. This aged rum from Trinidad and Tobago is big-flavored, slightly sweet, and a lot of my friends use it as a sipping rum. In my book, though, Zaya shines as a mixer, especially when it’s one of multiple rums in a drink. In fact, the odd snifter and Mai Tai aside, we’ve used almost all of it mixed in a Depression-era tropical concoction: The Nui Nui. 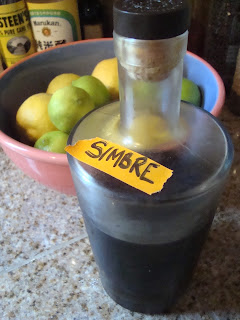 The drink dates back to the late 1930’s and is credited to legendary self-promoter and tiki forefather Don The Beachcomber. How much do we like the Nui Nui? So much that we’ve downed three bottles of Zaya since this summer — and each drink, the way we make it, calls for only an ounce. The other ingredients are just fruit juices, Appleton rum, and a syrup we’ve dubbed Simbre Sauce.

We came up with Simbre Sauce because of the sheer volume of Nui Nuis we were downing. The sauce has perfectly legitimate non-boozy uses and sometimes gets drizzled on ice cream or yogurt and granola around here. But its real purpose is to cut down the time it takes to make a drink. Rather than pouring the various syrups and tinctures called for in the original recipe every time we wanted a batch, our friend Douglas pre-batched them as a single syrup to streamline the process. I dubbed the result Simbre (SIM-bray) Sauce after an old name in his family.

Mix, bottle, and store under refrigeration.

Ingredient notes: I use homemade syrups in the concoction above, but Trader Tiki’s range of tropical syrups make blending something like this a snap. If you do use Trader Tiki syrups, be aware that the cinnamon is strong and you may need to use a little less. This is good: it leaves more to go around. If you want to make your own, add 6 4” cinnamon sticks to 2 cups of water and 2 cups of sugar in a pot, simmer about 2 minutes and allow to cool before straining and bottling.

For the pimento dram, unless you're the sort to make your own, use St. Elizabeth Allspice Dram. Eric Seed of Haus Alpenz has been importing the stuff and since I bought my first bottle, I’ve never been without some.

And now, the Whiskey Forge variation of this old tropical drink. It lacks the traditional long orange peel and uses block ice rather than crushed ice. If you want to make one that adheres to the old method, see Kaiser Penguin’s take on it below.

Combine the ingredients in a shaker and shake with ice. Strain into ice-filled mugs. Sip. Smile.

Posted by Matthew Rowley at 4:40 PM