I woke this morning thinking about adobo and Pfeffernüsse. No, it's not some lame odd-couple cop movie. They're two different foods. My brain runs that way, holding simultaneous parallel thoughts that have nothing to do with each other. It's not always for the best.

Adobo is a particularly Filipino way of preparing chicken, but also beef, pork, fish, and other animal proteins that often incorporates vinegar, garlic, black pepper, bay leaves, onions, and sometimes coconut milk. It's amazingly good and my life is better both for knowing how to make a few varieties and for having stellar Filipino friends who introduced me to it. 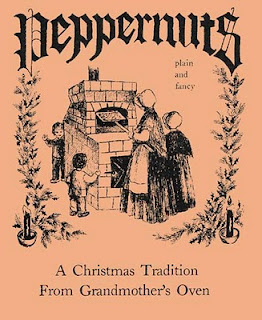 Pfeffernüsse, on the other hand, hail from Germany. They are tiny cookies (literally "pepper nuts") that are more or less heavily spiced. They're good with coffee, tea, hot chocolate, hot spiced wines, and other winter warmers. Spices may include black pepper, anise, mint, ginger, cloves, etc. One also finds them under similar names in Russia, Ukraine, Poland, and Scandinavia. I first had them in graduate school in Kansas where a large Mennonite population still consider them part of traditional — almost obligatory — Christmas baking.

See? Simultaneous parallel thoughts that have nothing to do with each other.

Then, as I mulled over the morning's news with hot tea, I pulled a book on Pfeffernüsse off the cookie shelves. Page 25 of Peppernuts Plain and Fancy holds this little gem contributed by Johanne Reynolds of Hong Kong:


In Denmark pebernødder (peppernuts) were very much a part of our Christmas celebration. Not only did we children bake them, but also played a peppernuts game — 'filippino' — guessing how many pebernødder an opponent held in his hand. If you guessed correctly, he forfeited his handful to you. If wrong, you shared from your "store" the same number he held in his hand. That's the nearest we ever came to gambling in our Lutheran home!

A simple game for simpler times. Maybe 'filippino' was just one family's game, maybe it was more widespread. I'm not Danish, so I don't know. I do wonder, though, how it came to have the name. No answers today, just questions.

And Holland's a pepernoot country, too. I miss'em, darn it!

Hey Tammy ~ Always good to hear from you. I've never had a Dutch pepernoot (but you've suddenly reminded me of Frisian suikerbrood and I am craving it with afternoon tea).