Texas Tea, a Punch in Disguise

Texas food has been on my mind, apparently, for years. When I pulled down my accretion of Lone Star cookbooks, the stack reached to my hip. As I research something else entirely, I’m earmarking drinks recipes. Tequila, as you can imagine, looms large in the ingredients lists. Beer, too. Lots of citrus juices and occasional jolts of mezcal come into play. 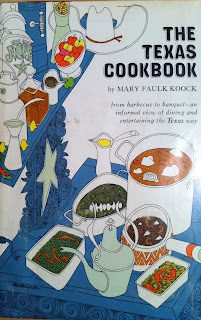 It’s with no surprise that I suddenly remember my Texas cousins measuring driving distance in units of beers: “Oh, it’s about two beers east of here.” Serious? Joking? Just testing my reaction? It occurs to me that “Texas dent” may refer not just to the indentation one puts on a can of beer to mark it as one’s own, but to car and truck bodies influenced by overindulgence in barley pop.

Mary Faulk Koock’s midcentury The Texas Cookbook puts a slightly more elegant spin on Texas sips. Her method of adding water to a strong tea base is pretty close to how I make iced tea. But then notice what gets served alongside as a matter of course.

Save time by making a tea concentrate beforehand. Bring 1 ½ qts cold fresh water to a full rolling boil. Remove from heat and immediately add ¼ lb. loose tea. Stir to immerse leaves. Cover. Let stand 5 minutes. Strain into teapot and leave until tea time. At the table, pour about 1 oz. concentrate into each cup, and add fresh boiling water from a teakettle. Serve with a choice of lemon slices, rum, sugar, and cream.

Posted by Matthew Rowley at 8:41 AM

I love tea with rum. Have you ever tried icecream made from tea with raisins soaked in rum? It is to die for… Especially with some "boerenjongens" on the side. Boerenjongens litterally means farmboys and it's raisins on brandy… Rum AND brandy! Double fun… Greetz from The Hague, The Netherlands.

I do know "boerenjongens" — When I lived on the east coast of the US, I sometimes came to Amsterdam for long weekends, though I never made it to The Hague.

Rum and tea can be delicious. And for sore throats, what could beat tea, honey, and whiskey? Well, maybe brandy and rum.

Oh, and here's rum, tea, and arrack all together: http://matthew-rowley.blogspot.com/2008/08/swedish-punsch-and-lemon-punsch-pie.html