Distiller: "What are you doing with that book?"
Me: "I wrote it."
Distiller: "No shit?! Dude, will you sign it for me?"
Rummaging around for something else this morning, I found the original introduction I wrote for my book Moonshine! Now, even though that intro got cut, I'm perfectly happy with how the book turned out and both touched and pleased how it's been taken up by amateur and professional distillers as well as a growing urban homesteader movement as well as folks who just are curious to know how spirits are made. 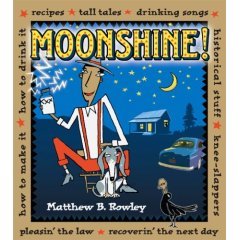 It's on sale at Amazon but it seems like Powell's in Portland sells more copies of that book than any other free-standing bookstore in the US. Hats off to Powell's — and especially to Tracey, whom sources tells me wrote a very nice review of the book and posted it right there on the shelf.

This, then, is for Tracey: The original introduction for Moonshine!, which has never been printed anywhere. Cheers!


I’m walking in downtown Asheville, North Carolina, musing over a dinner conversation with my waiter. Jesse is twenty-six, maybe twenty seven, a transplant from Pennsylvania. And he’s a moonshiner. Not a home distiller, as a New Yorker or Californian might call himself, but a moonshiner. We are, after all, in the mountain South where in some circles a certain degree of pride accompanies the term. As I pass a grizzled old man on a bench, he looks me right in the eye. “That boy,” he announces, “cain’t hold his liquor.”

Who cain’t hold his liquor? I cain’t hold my liquor? Why would he say that? Do I give off some fear-like pheromone that tells drunkards I cain’t hold my liquor? Jesus. Can cops smell it? Maybe it’s Jesse who cain’t hold his liquor. The old man could have overheard our conversation at the restaurant. Was he warning me to stay away from the waiter? No. No, this is not a restaurant kind of guy. It’s his own weakness he’s throwing on to others, a conversational sleight of hand to confuse anyone who suspected him of upending too many bottles himself.

In the end, the disjointed pronouncements of a chronic drunk say more about my state of mind than his. Moonshine has infected my thoughts more than I suspected. I’ve become so attuned to signs of illicit distilling, interpreting codes, and listening to the spaces between words that a blush of moonshiners’ natural paranoia is coloring my regard for other people.

Moonshine is back. Here’s what I know about it.

Snag a copy for Christmas from Powell's. I'm pretty sure cops can't smell it. Unless they can smell cool.
Posted by Matthew Rowley at 11:52 AM

That reminds me, I still gotta hunt you down for an autograph in my copy.