Beam's Red Stag. I Confess, I...I Kinda Like It

Let me be quite clear: I do not, in general, approve of commercial flavored whiskeys. That’s not to say they don’t have their place. Leopold Bros, for instance, make a Georgia peach-flavored whiskey I like having around. And there are plenty of worthy infusions made in homes and bars across the country.

The problem with most whiskeys that come out the bottle pre-flavored, on the other hand, is that their tastes are artificial, their sweetness cloying. I’d no sooner pour one of these for guests than I would spit in their drink.

Yet at 9am Sunday morning, I stood in line at a local drug store with two bottles of Red Stag, a new(ish) cherry-flavored whiskey from Jim Beam. I blame The Tractor Room for this…uncharacteristic move. 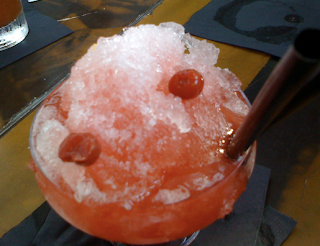 We like to hit The Tractor Room for breakfast on weekends. The full cocktail list — one of San Diego’s better drinks menus — is available even at that early hour. Several weeks ago, we sat on the deck, powering through rabbit, biscuits & gravy, and a fried chicken benedict and basking in the mid morning sun. As the sun climbed in the sky, my habitual iced tea just wasn’t as cooling as I liked. So I ordered a snowball. A boozy one.

The Tractor Room’s snowballs are coupes of shaved ice, blessed with alcohol, that change as the menu switches out. That day, the offering was a cherry snowball made with Red Stag, housemade cherries, simple syrup, and lemon zest. What the hell, I thought. Let’s get one. I’d been seeing Red Stag around for the better part of a year, but my prejudice against flavored whiskeys stopped me from buying any.

It turned out to be surprisingly tasty. Red Stag is by no means a sophisticated sipping whiskey — it’s just not in the same league as Booker’s, Old Fitzgerald 12 year, George T. Stagg, or any of the van Winkle offerings. But as a mixing whiskey, I’m beginning to like the way it enlivens some drinks with dark cherry notes. From now until New Year’s, liquor will be on sale at heavy discounts. Red Stag retails for around $20/750ml. I’m not particularly interested at that price — for that, I can get 1.75L of regular Beam at Costco — but when it’s on sale at $13 and some change? I’ll lay in a small supply on a Sunday morning.

The Tractor Room staff make enhooched cherries in house for their cocktail menu. Sometimes the drink comes with lemon zest, sometimes not. It's better with. The fire engine red maraschino cherries so readily available aren't the same. If you don't have any, here’s my recipe for making them over at Tuthilltown Spirits.

Fill a shaker with ice cubes and shake the whiskey, cherry juice, and simple syrup in it. Mound crushed ice in a coup, then slowly pour the iced mixture over it. Garnish with house made cherries and a few strands of lemon zested right over the stop. Serve with a short straw. 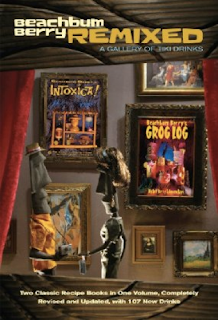 Purely on a whim one night, we swapped out Red Stag for the bourbon we’d normally use in an Eastern Sour. Hey, we’ve got to do something with it, right? The Eastern Sour was one taught to me by Jeff Berry at this year’s Tales of the Cocktail in New Orleans and I’ve been making them on and off ever since. It's one of the few tiki drinks not made with rum. According to Berry, it's a 1950's recipe traced directly back to Trader Vic. Red Stag lends an additional layer of exotic-seeming fruitiness while still making sure there’s a definite whiskey kick. From Jeff Berry’s Beachbum Berry Remixed, here’s a twist on the Eastern Sour.

Shake with plenty of crushed ice. Pour unstrained into a double old-fashioned glass or short-stemmed goblet. Sink spent orange and lemon shells into the drink.

What I like about Stag is that it's full-proof. Keeps it from getting too gloppy. Sip? Huh-uh. Mix? Can work nicely.

I hear you, Lew. It's not as versatile as, say, vodka — but what is? Over on the Facebooks, Jeff mused that it might go well in a Blood & Sand. That's on the short list to try. I'm thinking it might play well with orange, chocolate, and almond notes. Time, clearly, to do some more experimentation with mixing.

Try adding Red Stagg to BBQ Sauce. Then baste some ribs with it that have been cooked over cherry wood.

Let's just say that cherry won't be the only wood around when you taste the ribs!