Sundays are my lazy days, a weekly chance to read papers, enjoy of cup of tea or five, and do kitchen tasks. Sharpen knives, clean the fridge, refill containers — inventory and maintenance type stuff mostly. For a few hours this past Sunday, I had the house to myself, so I pulled out all the spices and dried herbs from the cabinets, washed the shelves, and took stock of what was there.

Plenty of kala jeera, but not enough barbecue sauce. 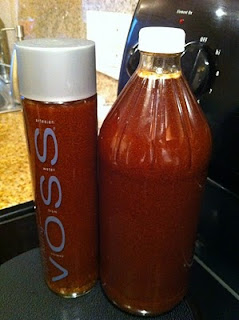 Simple enough to fix. After making ice, it's one of the easiest recipes I know. The vinegar-spiked red pepper sauce I’d learned to make in North Carolina was nearly gone. Unlike the thick, tomato-based Kansas City-style sauce we see today, the stuff I came like so much in North Carolina has no tomato, onion powder, or other such embellishments. Other than vinegar, in fact, it has only four ingredients; chile powder, salt, pepper, and a touch of sugar. Some recipes call for “crushed” red peppers. Wrong. You don't want the stuff that goes on pizzas. What is needed here is powdered chile, preferably Chimayo red from New Mexico.

I’d come to appreciate the style at a BBQ place called Bullock’s in Durham, North Carolina while living in the area. It was also at Bullock’s where I had the epiphany that heavily-sweetened iced tea perfectly matched the tart vinegar sauce on the pulled pork. The less-sweet tea of my Kansas City youth made sense as well: not as much vinegar in the sauce there, so it doesn't need sweetness to balance the meal.

When I was leaving North Carolina, I pulled up to Bullock’s, ate my last pulled pork and hush puppies plate, and bought a liter of barbecue sauce on the way out the door. I’d brought my own bottle. I doused eggs with it, dashed it over collards and kale, drizzled some over fish, and, naturally, paired it with slow-cooked pork.

This isn’t Bullock’s recipe (I didn’t even bother asking), but it does put me solidly in a North Carolina state of mind. It's fair to say I haven't been without it for 15 years.

This stuff’s been known to eat through metal caps, so I store it in glass bottles with plastic screw-on caps. Some refrigerate it, but I hardly see the point. Mine stays in the cabinet where I can grab a bottle without rummaging around.

For a little over a liter/quart of this thin, piquant sauce, combine all the spices with 3c/750ml vinegar in a large measuring cup, jar, or pitcher. Whisk thoroughly. Before it has a chance to settle out, pour through a funnel into a clean glass bottle. Add the remaining cup/250ml of vinegar to the mixing container, swirl it around to get any spices that might be adhering to the sides, then quickly pour it into the bottle. Cap and set aside to cure for a few days (though, in a pinch, you could use it right away).

Which vinegar to use? Plain ol' grocery store distilled white is fine. Better still, use cider vinegar. That's the stuff I like. You can certainly use rice wine vinegar, but I wouldn’t waste the money on champagne vinegar. Balsamic is the wrong flavor entirely. Might be good in some other BBQ sauce. Not this one.
Posted by Matthew Rowley at 6:13 PM

Hell, Trid, for 10 years, we lived in Philadelphia where a barbecue was, more often than not, a social gathering centered on beers (so far, so good) and a Weber kettle grill covered in aluminum foil with burgers, hot dogs, and/or chicken breasts were cooked quickly over direct heat. Well, you know, except for the foil, because...I'm not sure exactly. Either for easy clean up or to somehow protect the food. Either way, it wasn't BBQ by any rubric I'd ever known. The beers were good, though, and the company top shelf.

Okay. Say you were living in France, and you just returned from NYC, and you hadn't yet slaked your thirst for all things non-French. (EMPANADAS, I miss ya so!) So you're determined to make this BBQ sauce. But there's no powdered chile to be had, anywhere in the country, and you don't have a coffee/spice grinder. How would you manage with "crushed" peppers?

It's been a few years since I've stepped foot in a French épicerie, so I'm not up to speed on current common offerings, but I've got to think that there are powdered chiles that can be substituted with good — if not 100% authentic — results.

Smoked Spanish paprika comes to mind for accent notes: it doesn't have the heat you want as the primary chile, but the smokiness could be a great addition. Next, I'd consider Moroccan/Tunisian/Algerian chile peppers (when dealing with exotic spices, you've got to hit some exotic stores). Maybe some of the hotter Hungarian paprikas would work.

I've tried the sauce with crushed peppers and the results really are disappointing. Maybe, maybe you could put all the ingredients in a blender or Cuisinart and just blend the hell out of them: but keep in mind that the capsaicin in the seeds may make such a sauce (really a chile vinegar) hot indeed. That may be fine for you and me, but I've found the French don't in general appreciate heat in foods as Americans do.

When all else fails, hit the internet. There're a few chiles I'm almost never without; chipotles (dried, powdered, en adobo), anchos, arbol, hot and mild New Mexican, and powdered green New Mexican. Surely someone would ship to you.

Or, you know, there's the blender. But it's not my first choice.

You might be able to find Aleppo pepper (a dried, crushed chili pepper), and it ought to come close.