An Excess of Port

I am inordinately fond of port wine. Tawny, ruby, vintage, late bottled vintage, Portuguese, Australian, even those of my own state, California. Whatever is at hand, I’m game. I was, nevertheless, taken aback that this weekend’s inventory revealed that fully 27% of our home wine stock is port. The numbers skew high because we’ve been drinking the other wines and not replenishing the supply. Plus, frankly, I’d lost track of how much port I’d laid down in the first place. But still. Damn.

I’m acquisitive, sure, but no hoarder. It’s time to reduce the stock. The inventory made me think, naturally, of grabbing a wedge of Stilton cheese, port’s classic postpriandal sidekick. 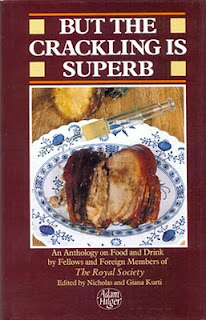 It also got me thinking of a fantastic little tome in the back library called But the Crackling Is Superb. The book is a collection of essays by members of The Royal Society (Britain’s long-standing academy of sciences) dealing broadly with the intersection of food, drinks, and science. If you read Harold McGee with pleasure, you’ll like this volume. In the collection, we see one of the earlier public displays of what’s now called molecular gastronomy and mixology. I’ve had it nearly twenty years and still find surprises in its pages.

Contributor John Postgate was Professor of Microbiology at the University of Sussex. His essay "Two Aperitifs" deals with concocting compounded drinks on a base of cheap British port. That’s the essay that popped into my mind as I mulled our port situation. Fresh out of cheap British port, I’m considering using his recipe for Corsican Aperitif, but deploying some of our stash of proper port — which he warns works less well. Hmm. We’ll see if Professor Postgate and I have similar tastes.

The recipe was developed with his father as the two of them sought to create something akin to French aperitifs such as Dubonnet, Byrrh, and Cap Corse. Postgate’s notes are included in brackets.

Take 1 bottle of British Ruby or Tawny Port wine, sometimes marketed ‘of Port character’ [1]. Add 2 to 4 drops of quinine bitters [2]. Insert a vanilla pod [3] and leave to steep in the bottle at room temperature for at least 3 weeks [4]. Decant from the pod (which can be re-used) and serve with ice, with a slice of lemon, or straight.

[2] A thimble of Campari, not available at the time of our researches, is ideal.

[3] Nonsense, Use 2-3 drops of vanilla essence and skip the decanting. My parent was rather against essences.

[4] Chemists will find this difficult to believe, but 3 weeks at domestic room temperature transformed it from vanilla-flavoured port into a drink with its own character. I’ve kept it for six months longer without further improvement.

Postgate goes on to offer Solace, “a good cheap aperitif” that “goes down well for elevenses with cake.” It is nothing more than a bottle of (again, cheap British) white port flavored with a swath of orange peel (sans pith) and decanted after two days. Postgate warns not to use orange essence which would make the aperitif “surprisingly nasty.”

Well worth tracking down:

Posted by Matthew Rowley at 8:44 AM