Kevin Kelpe over at Save the Drinkers has thrown down the latest challenge to drinks bloggers who participate in Paul Clark's (more or less) monthly cocktail throw-down, Mixology Monday. Today’s MxMo has a theme I can snuggle right up to: local flavor.

Option 1: Gather ingredients that are representative of the culture/geography/tackiness of your respective cities and make a drink with a truly place-based style. For example, huckleberries are native to the geographical area where I live, as are elderflowers, potatoes, and extremely conservative, closet-case politicians. (I’m just saying!)

Option 2: Dig up an old drink that came from your city and revive it! If you can find the original bar, that would be even more interesting.

Since sun-splashed San Diego is home these days, and there is so much cross-border traffic and influence upon and from Baja California just 15 minutes away, I decided to go local with a drink that’s not indigenous, but has adapted to the local climate: the Bloody Mary.

Obviously, the Bloody Mary didn’t originate here. For that, we’d need to turn to 1920's Paris when Russian émigrés were downing prodigious amounts of vodka, then an obscure Eastern spirit rather than the ubiquitous global powerhouse that it is now.

But just try to go to a Sunday brunch or a daytime pool party in Southern California where the host doesn’t serve the tomato-based cocktail. Nothing’s stopping you from having one as a nightcap or even dinner, but in general, it’s not a late-night drink. Instead, it’s meant to be consumed as a palliative, a hair of the dog, or just a way to greet an undemanding day. 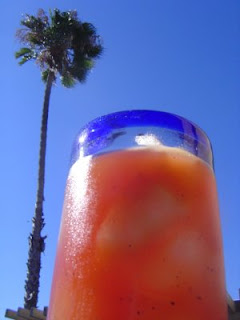 The Mexican elements are Cholula hot sauce (which is made from pequin and arbol chiles and doesn't quite have Tabasco's vinegar bite), and Clamato, a proprietary blend of tomato juice and clam broth that seemed called for since tomato-and-seafood cocktails are popular in these parts. If you detest clam broth, use plain tomato juice instead, but consider: In blind taste tests professed Clamato-haters preferred Clamato variants hands-down.

The twist? Absinthe. While we were picking apart our favorite Bloody Mary version, my eye fell on a dasher of absinthe I use for adding very small amounts to cocktails. Also once popular in Paris, but before the vodka years, the high-proof spirit was known as la fee verte (the green fairy). In it went. It’s something you can leave out, of course. I wouldn’t, for instance, go out and buy a whole bottle just for this. But if you happen to have some around, just a few drops transforms a very tasty Bloody Mary into a more complex, suave, and seductive drink: The Bloody Fairy.

Unlike its stature in the history of cities such as New Orleans or San Francisco, absinthe has no claim on the soul of San Diego. But if by “local” Kevin also means as local as my patio, it’s very characteristic of this place.

Be warned, though: too much absinthe ruins this drink and, in this instance, too much can be the matter of a single drop. Titrate to find the perfect balance for your taste by adding a drop, tasting, and adding another drop if the drink will bear it. You could do as I did and repeat until you destroy the drink. But after repeated tastings, I’ve found that five drops is the absolute threshold: more than that makes this cocktail too bitter in an unbalanced, kinda nasty way.

Combine in a 12-oz glass, add ice, and stir to mix. Garnish with a celery stick and/or a few slices of pickled jicama.

very cool. you're in the roundup. cheers!