In 1932, Baltimorean Frederick Philip Stieff published Eat, Drink and Be Merry in Maryland, a collection of hundreds of recipes from handwritten recipe books for which he has scoured the state. He also talked with old cooks to record their recipes and methods before they were lost in the onslaught of modernity.

The book includes Mid-Atlantic classics such as soft crabs, shad roe croquettes, diamondback terrapin, and marsh rabbit (that’s muskrat to you and me, a specialty still occasionally enjoyed in New Jersey church dinner fundraisers—if "enjoy" is the right word). It also covers a number of preparations we tend to think of as part of southern foodways: smothered catfish, sea bass sauté meunière, chery bounce, and mint juleps. 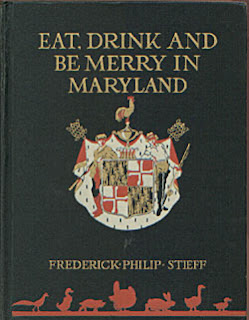 Cured meats are not overlooked. Brined, smoked, and pickled pork is here in abundance as well as sausage and scrapple. One of the many ham recipes really caught my eye, however. John B. Gray of Calvert County contributed his recipe simply for “Curing Hams.” It calls for smoking a brined country ham with sassafras wood.

Now, I’ve had hams smoked with apple, oak, and other hardwoods, but never with sassafras. I’ve talked about sassafras before and it’s a flavor I like—especially as filé to thicken and season gumbo. I haven't yet tried this recipe since my ham-curing operation is decidedly small-scale. More importantly, we just don't have sassafras wood in San Diego. When I get my hands on some, though, I fully intend to try a variation of this recipe for smoking bacon.

½ bushel of salt, 2 ½ teacups of saltpeter, 1 teacup red pepper, 2 teacups black pepper, 3 cups brown sugar. Mix thoroughly and rub on pork, when not frozen, next day after killing. Lay hams in bulk on shelf for six weeks or longer. Then hang up and smoke, using sassafras wood, if possible, for the fire—smoking until light brown. Then bag, dipping the bagged ham in lime or whitewash solution. Hang until ready to use. Hams are better if not used for one year. Receipt cures about 20 hams weighing 10 or 12 pounds.

The bag to which Calvert refers would have been a cotton/linen bag like a ham-sized pillowcase into which the cured and/or smoked ham would be placed and sewn shut to help keep the ham's shape and to keep out insects.

interesting recipe. maybe with a source of sassafras wood a person to smoke some hams could be found around San Diego county?

A source of sassafras wood in San Diego could well be my undoing. I've been wanting to build an actual smokehouse for a long time. In the end, I'll probably go with a smaller semi-portable job like a Smoky Mountain or a Green Egg, but the prospect of smoking with sassafras — shoot, just smoking — is too good to pass up.

A full-on smokehouse, after all, would be a little awkward to explain at home...

My family uses sassafras to smoke meats all the time! (My personal favorite is Italian dressing marinated boneless chicken breast!)yummy!